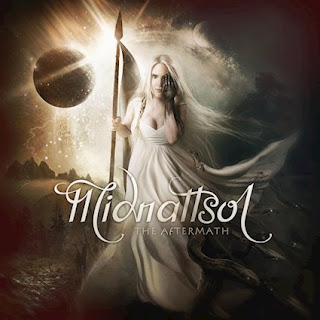 Acoustic  guitars  start  off  the  album  along  with  some  elements  of  folk  music  and  keyboards  before  going  into  a  heavier  direction  which  also  introduces  melodic  guitar  leads  onto  the  recording  while  the  female  vocals  are  done  more  in  a  clear  style  and  also  gives  the  songs  more  of  a  goth  metal  feeling.

Midnattsol  plays  a  musical  style  that  takes  folk  music  and  mixes  ti  with  symphonic  and  goth  metal  along  with  a  touch  of  melodic  death  metal  to  create  something  original,  the  production  sounds  very  professional  while  the  lyrics  cover  Fantasy,  Mythology  and  Nature  themes.

Posted by OccultBlackMetal at 2:12 PM