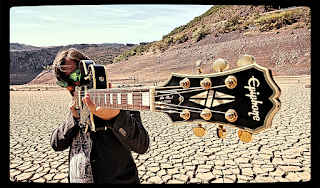 1.For those that have never heard of you before, can you tell us a little bit about the musical project?

Hi!!! It’s a true pleasure to be answering this interview.

Well... A lot of things are happening in these two last months to North of South, since publicly presenting. However, there has been a lot of work behind the scenes.

North of South officially was born in 2017, but I was working in my own compositions for the previous 4-5 years.

My first intention was to gather some people with a common artistic vision: to make a different/crossbreeding kind of Metal. Anyway, as years passed, finally, North of South remained as a solo project and I decided to assume every role and instrument, which gave me total creative freedom.

Regarding music, North of South proposes a fresh and daring mixtures of styles: from Progressive Metal to Pop, from Jazz to Melodeath, from Latin to Gothic... However, its music contains enough heavy riffs to please every die-hard true metal fan.

Experimenting, but maintaining a certain line of musical coherence, is the true nature of North of South.

2.You have a new album coming out towards the end of September, can you tell us a little bit more about the musical style you went for on this recording?

I think it’s some kind of sophisticated result of the music I have listened in my life.

For example, I love Swedish Melodic Death (In Flames, Soilwork, Dark Tranquillity, At The Gates), so this reflects in same search for melody in a context of heaviness and harshness.

But I also dig unique and bold bands like Opeth, Katatonia, Amorphis, Novembre... That kind of musicians that do not fear to evolve and experiment. So this attitude of avoiding creative restraining is a basic principle for North of South. It’s something that NOS also share with Progressive bands, which are another main influence for North of South.

Anyway, as I’m truly interested in melody and creating some catchy Metal, some quality 80-90 Pop elements are also integrated in North of South’s formula, as well as some Latin influences that come from my own culture and that gives to North of South some plus of unique identity.

3.Your lyrics are inspired by the writings of William Shakespeare, Orson Scott Card,  and Jorge Luis Borges, can you tell us a little bit more about your interest in their works and also are there any other authors that have an inspiration on your songwriting?

I’m so tired of these bands with a such limited lyrical spectrum... Satan, blood, evil,... Or dragons, warriors and swords,... Or that “united people of Metal against society” speech...

Ok... Above all, I’m a Metal fan, so, ocassionally, I can enjoy that. But that approach doesn’t fit with North of South as a band and with me as an artist.

Literary influences is something natural for me, as I’ve been reading all my life and looking personal inspiration in books.

I’ve always seen Jorge Luis Borges as a fascinating author with whom I share some concerns and topics: man against Universe, Reality against Fiction, the enigma of Time, the mirror’s game, the transience of human being,...

Some years ago, I dedicated my University thesis to him and his political evolution, so it’s a well-known figure for me.

These kind of topics (Humanity, time, our place in universe, ethics...) are also common in the work of some relevant sci-fi authors, like Orson Scott Card, Isaac Asimov,... Their writings are also very inspiring...

Regarding Shakespeare, he was the best when portraying the human condition, our motivations, our forces and weaknesses.

If you go deep in “New Latitudes” lyrics, you’ll find that the person is in the center of the album. Every song talks about how we relate with each other, what are our motivations and fears and how we can be a better and more complete individual.

I also love other amazing author like José Saramago, Paul Auster, Aarto Paasilinna and some classic Spanish writers, like Unamuno and Quevedo.

4.What is the meaning and inspiration behind the name 'North Of South'?

It summarizes the ambivalent nature of this music project. It’s the melody and the heaviness; it’s the election of English language but without renouncing my Spanish/Latin cultural heritage; it’s the continuous search of mixing different genres.

Also, in a literal way, it makes reference to my own city, León, that it’s located in the North of Spain, the southernmost European country. So NOS is in the North of the South, haha.

5.Can you tell us a little bit more about the artwork that is presented on the album cover?

As with lyrics, I wished to avoid some Metal/Evil topics, like monsters, blood, warriors, spikes and that stuff...

So the final artwork symbolises North of South’s vocation of exploring unknown musical latitudes. The astronaut figure and the planetarian background fits very well with that. The booklet also includes some brilliant work by José Luis González Macías, a local artist from León, with some powerful imagery with floating islands, enigmatic lighthouses and lonely cosmic men.

6.On the album you record everything by yourself, are you open to working with other musicians or do you prefer to work solo?

Yeah!! Why not? But some specific conditions must be present. In a small city, like mine, it’s not easy to find other people who have the same risky metal perspective like me. Usually, most of the people want to play a particular style: thrash or metalcore or traditional metal or death metal or hard rock. But when you say: “ok, let’s mix all of that and also to include some jazz, pop, latin elements and, at the end, use clean vocals very far from Dickinson/Halford standard...” Well...you have to be lucky enough to meet someone who understands such specific way of approaching Metal.

At the present moment, I prefer to appreciate the benefits of working alone, especially the fact of not having cut my artistic freedom. Right or wrong, it lets me to make the music that I feel inside.

7.You have also been a heavy metal radio show for the past 2 decades, can you tell us a little bit more about your work in that field?

I'm a professional journalist, not specialized in music, but in news. I work for a relevent national radio station. Working here, one day I had the opportunity to take over a veteran metal radio show in an affiliated music radio channel. Well... That was in 2001, so this is my 17th season with this show. I really enjoy doing it every weekend, sharing my tastes with listeners and constantly discovering new bands. That's a very important point: it's very helpful for me to be up to date about what is happening in Metal scene.

8.On a worldwide level how has the reaction been to your music by fans of metal and other genres of music?

I'm very happy with the first reactions. Everything is going a bit fast, but it is great. Only two months of public activity for North of South and I'm getting in touch with a lot of very interesting people.

Some great reviews and coming. And I feel that many listeners have understood NOS' proposal: forward-thinking, nonconformist listeners that are always looking for something different in Metal.

In any case, North of South is taking its first steps of a very long journey. I just want to work very hard, with a humble attitude, and trying to enjoy all this process.

It's very difficult to stand out because there are so many great bands out there, so this first album just tries to position this project and to spread the word about North of South as much as possible.

9.Where do you see yourself heading into as a musician in the future?

Anyway, I know what I would love to and that’s dedicating music as much time as possible. I don’t know if that is going to continue in the future, but, at the present  moment, I feel the only limit to my creativity is the lack of time available for music and composing. Many unwritten songs are already in my mind and my heart and I wish I had enough time to materialize and share them with the audience.

Regarding North of South, I really want to keep experimenting and looking for an own music language and identity.

Although it’s not very present in North of South’s music, I’m particularly into extreme metal music, mainly into bands with a few drops of melody. I love bands like old Entombed and Dismember, the Goteborg Melodeath (In Flames, At The Gates, old Arch Enemy, Dark Tranquillity). Also some 90’s bands that evolve from the very extreme to a more gothic/melodic sound: Moonspell, Katatonia, Opeth, Anathema, Novembre.

But I listen to every kind of Metal genre. Iron Maiden are my favourite band. I love very different things: from Jeff Waters/Annihilator guitar stuff to Carcass, from Amorphis to old Deicide, from Joe Satriani to Killswitch Engage.

Talking about 2018 releases, some of the best ones that have been on rotation on my metal radio show are Immortal “Northern Chaos Gods”, Omnium Gatherum “The Burning Cold”, On Thorns I Lay “Aegean Sorrow” and Fractal Gates “The Light That Shines”.

Nowadays, music is absorbing almost all my available time. When you are in a one man band, there’s no choice to distribute tasks between other members.

Anyway, literature is one of passions. I really love reading novel, essays, etc.

Obviously, as a professional journalist, I’m very much into news, trying to keep informed.

And I also love soccer.

Finally, this next January I’ll have a baby, so childcare will become a new personal interest and hobby for me, hahaha.

Thank you so much for your amazing interest and incredible support to North of South. I hope your readers enjoy “New Latitudes” album, so if you want to support us buy the cd or/and follow us on Spotify and the usual social media.

That’s very important for new bands that, like North of South, try to pop in this competitive and massive worldwide metal scene.

Some cool merch will be also available on the official website: www.northofsouth.es

I’m already working on new stuff, so you can expect a solid continuity in NOS’ career.

Dare to explore new musical latitudes... North of South is a different kind of Metal!!!

Posted by OccultBlackMetal at 2:11 PM