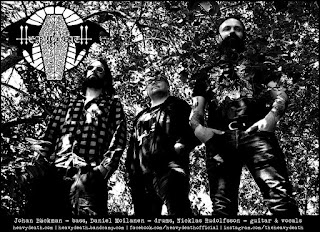 1.Can you give us an update on what has been going on with the band since the recording and and release of the new album?

Right now we are doing some small-scale promotion. We are also waiting for the CD version to arrive from the manufacturer. Unfortunately, it has become slightly delayed. But LP and MC were released on time. In addition to this, we will try to make a few shows during the next year.
There is also work going on to release a compilation double CD with mostly demo material. It will probably be released next year. Then there is plans for a split 7” with Excruciation next year.
So the machinery rolls on so to speak.

First of all, I would say that we are starting to get a good sound that suits our music. Do not think we've got it 100% before but now it feels like the whole sound package suits so to speak. As for the material, it's a mix of new and slightly older songs. But I feel that, on the whole, it feels more varied than previous albums.

I personally think about and writing music daily. Often I write music in my head when I drive a car or am in the woods. It is not always the right time to sit with the guitar and compose. But it is clearly an ongoing process for me. We are also trying to make some simple demos and so on.

4.What are some of the lyrical topics and subjects the band explores with the newer music?

In general, there are some thoughts about the fate of our so-called civilization. There are things to see for those who can, for those who want to. There is ancient wisdom to learn from, both the warnings and the knowledge.

5.What is the meaning and inspiration behind the name 'Heavydeath'?

It's hard to find a new good band name these days. I tried to find something that suited the music and the lyrics and the first suggestions were in Swedish “Tung Död” or “Den Tunga Döden”. We had some other suggestions too but then the decision was made that it might be best to have a name in English. And HEAVYDEATH it became. Sure, it may sound a bit primitive and too “simple”. But if you "taste the word" a few times, I think it suits.

6.What are some of the best shows that the band has played so far and also how would you describe your stage performance?

We have not been so active when it comes to performing live. For various reasons. Best best gig so far was the first at Mörkaste Småland Festival 2015 and actually the only one with the entire current line-up without session members. We need to get more experience playing live together, especially with songs from the new album that fits good live. So I really hope we'll be able to get some more gigs in the next year. There is no “big show” or so, but we do what we do and sink into the music and hope the audience will accompany our musical journey in body and mind. A long obscure trip...

No, but I hope, as I said earlier, that we can get our calendars in sync in the next year and that there are some suitable offers from bookers.

8.On a worldwide level how has the feedback been to your newer material by fans of doom and death metal?

As I see it, we play a rather “narrow” kind of underground music. Nothing for the big mass I think. But so far, I've only seen good response, from loyal fans to new ones. Also saw that some famous musicians have drawn attention to us which of course is nice. We create and play what we like ourselves and of course it's nice to get support and to hear that others like it too.

I will surely record something with my other bands and projects next year. Nothing is 100% so we'll see what happens. Maybe Runemagick, maybe TFO, maybe Necrocurse, maybe Domedag... Time will tell. Johan is doing some other projects on and off. Daniel is quite busy with Katatonia.

10.Where do you see the band heading into musically during the future?

As I can see and speculate right now, the next phase will go in the same direction as our new album “Sarcophagus In The Sky”.

11.What are some of the bands or musical styles that have had an influence on your newer music and also what are you listening to nowadays?

I listen to various stuff. But as always, I think what you grow up with is the closest to the music heart. So old classic. Everything from old sabbath to early death metal, black metal and doom metal.
Check my personal website http://nicklas.rudolfsson.net for som current Spotify playlists etc.

Be with the family, be out in the woods, etc. But the music, primarily composing, is clearly the main interest and a big part of my life.

Thank you very much for the interview. I hope more people want to listen to our new album and support us!

Posted by OccultBlackMetal at 10:06 PM