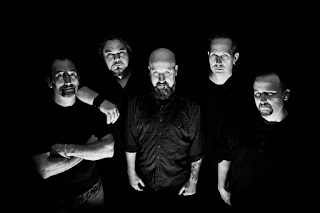 1.For those that have never heard of you before, can you tell us a little bit about the band?
Sure! Onera is comprised of members from past bands of various styles, some pretty notable: Tim (guitars) was in December Wolves and Watchmaker; Craig (guitars) was in local 90s band Mortuary; Curtis (vocals) was in Cortez; I (Justin- bass) was in Morgion & Keen of the Crow; Scott (drums) was in many local bands, including Tripwire. We play heavy, melodic, metal. I guess it's what some people would call progressive doom. Sometimes it's pummeling and hooky, sometimes it's ambient like post-rock. Not a lot of gruff or growling vocals, but present when it helps the mood of the song. It seems as though our songs appeal to people who are primarily into different styles.

2.Recently you have released an ep, how would you describe the musical sound tat is presented on the recording?
So, we recorded the first 3 songs we completed. We have had them for at least a couple years now, but once the line-up was set last year we went into the studio. In a way, these 3 songs represent our core sound and mix of influences...Unruhe is long and epic, it takes you on a bit of a journey. Still As A Stone is shorter and slower, a bit more straightforward and pummeling (a bit of Bolt Thrower) with a very atmospheric interlude in the middle centered around a spoken word piece about the end of the world (a highlight of the whole EP, I think). The last song, Cold Hand's Caress, is what we jokingly call the hot rocking single, as it is the shortest (7:30), and has more of a rock formula (verse-chorus-bridge) based on a really hooky riff and big chorus.

3.What are some of the lyrical topics and subjects the band explores with the music?
It started as mostly lyrics about the death of loved ones and mourning them, since that was my motivation when I moved to the East from California after losing my father, and then many other loved ones shortly after; and I started writing these songs and starting this band. Most of the other guys have also experienced significant loss in recent years since this band started. Since then the lyrical content has grown to incorporate personal struggles like dark events in the past, rising above challenges, anger & frustration about people, and so on. It's always dark!

4.What is the meaning and inspiration behind the name 'Onera'?
It is Latin for 'burden' or "a weight". we struggled for a long time to find a name for the band. We felt this was perfect because we experienced a lot of setbacks, delays and various difficulties in forming this band and getting everything into shape as it is today.

5.What are some of the best shows that the band has played so far and also how would you describe your stage performance?
We have probably 6 shows under our belts so far. Semi-local towns. We are trying to not play the same area too many times, and also make sure the shows are with great and interesting bands. Some of our better sets at fun shows were at Opus in Salem, Massachusetts with Monastery/Movie On the Way Down/Bedtimemagic and 2 shows at Ralph's Diner in Worcester, Massachusetts - first with Worshipper/Electric Sinners/Bedroom Rehab Corp, and just recently as our co-release party show with our friends in Conclave (support by Hepatagua and Enhailer). We try to put real energy into our show, and Curtis has a big part in that with all of his movement to the music around the stage, and with how he engages and communicates with the audience.

6.Do you have nay touring or show plans for the future?
We definitely intend to get on the road to do some shows in other places. we just want the timing to be right, so it's not a waste of anyone's time. Right now, the buzz is out on the EP and we are making great contacts. I'd like to be back in the studio this Fall and hopefully have a release on a label early next year, continuing the momentum and starting some touring.

7.Currently you are unsigned, are you looking for a label or have received any interest?
Yes, we are currently in the process of contacting labels to see who is interested in the band.

8.On a worldwide level how has the feedback been to your music by fans of doom metal?
It is still early so far, but we have heard all good things. People seem to understand what we wanted to do, and they appreciate the time we put in on recording, mixing and mastering the EP. Naturally, there will be some people who do not care for this band, or have criticisms, and we look forward to seeing that as well.

9.Are any of the band members currently involved with any other bands or musical projects these days?
Yes. Tim plays guitar in a longstanding local black metal band called Cold Northern Vengeance; and I play bass in Come To Grief, which is a sort-of reunion of 90s Boston sludge doom band Grief, where a couple of us are not original members, and the songs are mostly early material as well as new material songs we have written (should be recording later this year for a release on Fuck Yoga Records).

10.When can we expect a full length album and also where do you see the band heading into musically during the future?
We have many more songs (at least an hour of music) that we would like to record this year (hopefully Fall). The idea is to have the interested label in place and have them release the full length. We would love to see that happening by Spring 2017, but we'll all have to wait and see. As we continue to write I am sure we will continue to experiment with some of our other influences and see how it all fits into our sound.

11.What are some of the bands or musical styles that have had an influence on your music and also what are you listening to nowadays?
The influences are many, and do range, but some of the big ones for us are: Katatonia, Enslaved, Anathema, Faith No More, Bolt Thrower, Pink Floyd, Porcupine Tree, Isis, Dream Theater, Mindrot, Devin Townsend

12.What are some of your non musical interests?
I don't have a ton of free time these days, but I love to travel with my wife and our daughter, play with our dogs, hike and kayak, and play various card games/role-playing games with friends; Tim spends time with his son, and he is into guitars and gear; Scott spends time with his kids and hanging with friends; Curtis does stand-up comedy, he is certified to preside over weddings, he travels with his wife, and plays with his dogs and hangs with friends; Craig likes to golf, shoot guns, play video games and various card/role-playing games, and spend time at the lake with his wife and their kids and dog.

13.Before we wrap up this interview, do you have any final words or thoughts
Thanks for the interview...we appreciate all the support we get! Support the music, wherever you are! It is what keeps the bands going. Fuck scenes and fuck rock star attitudes.  We plan to keep busy, so keep an eye out for new things. Follow us at www.facebook.com/oneraband or www.onera.bandcamp.com
Posted by OccultBlackMetal at 12:25 PM