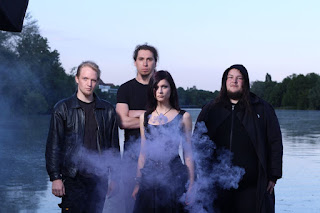 1.Can you give us an update on what has been going on with the band since the recording and release of the new album?
Well we did play a cupple of shows all over Germany and Chechz Republik and released our first official music clip this October. At the moment we are in the proces of songwriting, arranging and some pre productioning, the next album is planned for some time in the middle of 2015, but we all know how that goes :D

2.Recently you have released you first full length album, how would you describe the musical sound that is presented on the recording and also how does it differ from the album you had released in 2010?
Well the sound is a mixture of what we have accomplished in the years before and what we have
accomplished since we started taking it more serious. It differs from the EP of 2010 so far, that we have changed a lot since then. In 2010 we were Sara, Johannes and David, playing in the basement of Johannes' parents, we had no real idea of recording, and the process. For the "GUILTY" Album we had become Sara Johannes Sven and Torsten, with a real practise room, weekly sessions and a lot more knowledge.
For our sound, someone once said it is like at first you are being wraped in silk by this voice, and that you get kicked in the ass by the growls and the guitars. It's a mixture our of Gothic, Death, Melodic Metal with several different influences.

3.The band has been around since 2007 but so far their has only been an ep and 1 full length, can you tell us a little bit more about the gap between releases?
The band you can hear on the album "guilty" exists since 2012, before that, we didn't approach the whole thing professional, also in 2007 Sara and Johannes started to make music together, under the name "Buried Alive" what was a form of pre-existence of Dawn of Eternity, "Buried Alive" recorded 6 songs, that should still be on myspace somewhere ;)

4.What are some of the lyrical topics and subjects the band explores with the music?
Most of the lyrics are written by Johannes, who is a big fan of german expressionistic-poets and nihilistic-literature, so he takes things that annoy him, personal tragedies sadness, fears etc and tries to put it into a Georg Trakl style.

5.What is the meaning and inspiration behind the name 'Dawn of Eternity'?
It may be birth, it may be death, it is yours to choose. The story behind it, Sara wanted to change the name "Buried Alive", and she is always right :D, so we threw in names until one was all right for everyone, and that name turned out to be Dawn of Eternity.

6.What are some of the best shows that the band has played so far and also how would you describe your stage performance?
Johannes: The best show so far was in Blatná, Czech Republik, supporting Lord Volture, it was an amazing show, amazing people who really kept a party going, on a work tuesday.
Sara: Can't make a range what was the best so fare. It's allways great!
Our performance are very energetic since we give in everything we can and use full stage's place...
Come and see ;)

7.Do you have any touring or show plans for the future?
We have several shows planned, that you can check out on our webpage or facebook, and our plans are, to play as much as possible, you request us, and if it is arrangable we will play it. Also we want to make a new album as mentioned before next year and simply go on and grow...

8.The new album was released on NRT- Records, can you tell us a little bit more about this label?
Well we got to that through two friends from Austria, Major Tom Proll (king size)  and Jana from She Wolf. NRT is a small label but they still have passion and faith in what they do and not just long for the big
money. They really did do a lot for us even though we just joined them in October!

9.On a worldwide level how has the feedback been to your music by the fans of gothic or extreme genres of metal?
As far as we can tell pretty well ;)

10.Where do you see the band heading into musically during the future?
Evanescence is done for, due to a post of Amy Lee, so there is a big gap to fill in the genre of female fronted goth metal.... we will see..... ;)

11.What are some of the bands or musical styles that have had an influence on your music and also what are you listening to nowadays?
In the songwriting, you can hear influences of Iron Maiden, In Flames, Tarja, My Dying Bride, Evanescence, System Of A Down and many more. The nex album will show a little more/different influences but it'll still be Dawn of Eternity.
We exclude no type of music, that is based on musical instruments, not that hipster minimal electro crap or disco-dubstep, that shit is amazingly annoying, but we all have a tendency to harder music musical interests?
Sara and Johannes are in University, so besides going to a pub or some concerts, music consumes most of the spare time, other free time activities are working and drinking. Thorsten also loves to repair stuff and ferrets :D

13.Before we wrap up this interview, do you have any final words or thoughts?
Yes, we will start a kickstarter project next few weeks for the album 2015 since we're all broke and we'd love you to support us!! Beneath that there's the usual stuff, check out our webpage and facebook, listen to our music, come to our shows and rock on \m/, - Cheers
www.dawnofeternity.de
www.facebook.com/officialdawnofeternity
Posted by OccultBlackMetal at 7:07 PM