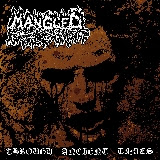 Mangled  played  a  mixture  of  doom  and  death  metal  that  was  very  underrated  and  ahead  of  its  time  and  the  music  was  heavily  influenced  both  the  Swedish,  English  and  Dutch  death  and  doom  metal  scenes  of  that  era,  the  production  sounds  very  professional  for  the  time  these  songs  where  recorded  while  the  lyrics  cover  dark,  occult  and  anti  religion  themes.