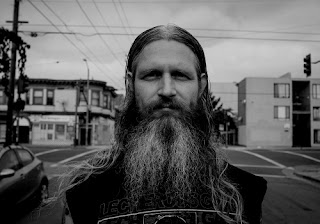 1.For those that never heard of you before, can you tell us a little bit about the musical project?

Leather Glove was created as a studio project.  Once Earhammer ramped up into a full time job (by '08), things got too busy to focus on being a musician myself.  After many years of this, I became afraid there would be a disconnect between myself and the artists tracking and mixing here.  Being an artist who understood extreme music kept me busy.  It was imperative that this remained the case.  Around that time, I was challenged with recording bands down tuned and the next layer deeper than the previous.  It was invigorating!

This inspired me to do 3 things:
1) Create a recording project and use my studio for art again
2) Challenge myself with hard shit to work with
3) Still write my style but use talented drummers I respect in order to sculpt a different sound for each release

The end result of each release is meant to sound disgusting and oppressive.

2.Recently you have released a demo, how would you describe the musical sound that is presented on the recording?

For this demo, Leather Glove merged D Beat, Sludge, Doom, Noise rock all going through a Death Metal filter played on a very slow turn table.  The goal was to create a project that would place importance on the music over production.  The grosser and nastier, the better.  An antithesis to a majority of modern brutal and tech death metal productions where everything is clean and triggered sounding.  This was and is meant to be a very primitive, raw and visceral experience.  Thanks to Chad (Necrot, Atrament, Rude) for banging the skins on this release.

3.What are some of the lyrical topics and subjects you explore with your music?

If I extrapolated on the lyrics too much, I would have to kill you...  You seem like cool people.  For that, just know it usually covers very oppressive subject matters, which can take a turn to "so over the top its just plain ridiculous at times" like the title track "Skin on Glass".  "Rods of Steel" covers Classism.  "Conduit to Misery" covers the subject of being force fed pharmaceuticals.

4.What is the meaning and inspiration behind the name 'Leather Glove'?

The project which I plan on always keeping a dark undertone will evolve its sound over time.  The need to find a name that is neutral to genres was important.  Leather Glove can paint both a brutal, comforting or a sexy mental image upon first sighting.  Leather Gloves have many associations from hiding fingerprints while making attempts to burglarize, murder and sabotage to keeping warm, protecting your hands to down right sleazy and sexual content.  Its weird how inanimate objects develop such associations.  In my head, someone could see the name "Leather Glove" and think "what the fuck kinda music is this going to be?"

5.With this project you record everything by yourself but have experience playing in other bands, how would you compare the 2?

Well, I borrow drummers for this as there is no desire to get good enough at them to pull it off.  But other than that I do everything.  The process is slightly different.  I have a very specific sound in mind while writing riffs / songs.  With Brainoil, Deathgrave and other previous bands there are tendencies, skill sets and interests that vary from member to member.  When riffs get thrown into a band environment, one has to be willing to see it soar in a different direction than intended.  When doing Leather Glove, there is only a drummer to bounce riffs off of.  So I write whatever I feel like knowing it can be layered exactly as intended once the beat is discovered.  The drummer has a lot of input due to their ability and desires on how to treat the riff.  But in the end, there is only 1 other person beyond myself to weigh in on song structure.  Believe it or not, it makes a big difference.

6.You have played in plenty of bands for the past 20 years, what is it that motivates you to keeping going after 2 decades?

A desire to create and refine myself and music is what keeps me alive.  I received my first bass 25 years ago and knew so much could be done with it.  Real music is an organism that constantly evolves for those who pay attention.  It can't be mastered and should not be tamed.  Knowing this has signed me up for a life long journey of music.

7.You have also engineered plenty of albums over the years, can you tell us a little bit more about it?

Its my full time job.  Not only do I feel honored and lucky to have such a career, but it also keeps one humble and in check.  I've produced 100's of records at this point that involve many directions of extreme music.  I still live hand to mouth and see musicians whose talent is so superior to "professional" artists that its criminal they are working pizza joints and coffee shops.  A few bands I've worked with (other than my own) are Graves at Sea, Vastum, Noothgrush, Lecherous Gaze, Saviours, Badr Vogu, Amber Asylum, Iron Lung, Asunder, Necrot, Worm Ouroboros, Extra Action Marching Band, and Lycus.

8.On a worldwide level how has the feedback been to your solo material by fans of extreme metal?

So far, so good.  Its cool to hear people enjoy the noise in my head.  No deaths or casualties in relation to listening to the stream, so my slate is clean.

9.What is going on with some of the other bands or musical projects these days that you are a part of?

Brainoil - writing our 3rd LP.  Really happy with the direction its going in and feel this will be our best effort to date.

Deathgrave - 2 songs short of our 1st LP.  Very excited about the music on this as well.  It will crush all our previous records in my opinion.  Split 7" with Endorphins Lost is at the pressing plant and probably won't be out in time for our SW tour in June (common story these days).

10.Where do you see this project heading into musically during the future?

11.What are some of the bands or musical styles that have had an influence on the project and also what are you listening to nowadays?

As far as this release, Deep gross and terrifying sounds was the end goal.  Many elements created the underlying basis for this release. But a few notable ones were merging tempos akin to Coffins, Grossness of Undergang, Grooves of Brainoil, and repeating chromatic phrases with delayed guitars inspired by Zeni Geva and Swans.  I am on a new musical tangent every week it seems so a list would be futile.

I enjoy hanging out with my partner Fern, hiking, camping, reading and films (especially dissecting the foley and scores within them).

Thank you for the interview.  Special thanks to Mattia (co-releasing tape), Chad (drums), and Boo Boo Danger (artwork).  May 20th will be the release date where:

1)  The whole demo will stream on www.cvltnation.com

3)  I will have digital downloads and/or streaming on itunes, spotify, youtube, soundcloud and many other digital domains.

Feel free to spread the word and thank you for reading this far!
Posted by OccultBlackMetal at 6:24 PM