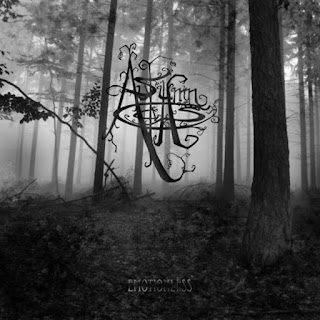 Rhythm  guitars  are  all  slow  riffs  that  combine  doom  and  death  metal  together  with  a lot  of  dark  sounding  melodies  being  thrown  into  the  riffing  with  the  songs  being  long  and  epic  in  length,  while  the  lead  guitars  are  very  melodic  sounding  guitar  solos  and  leads, as  for  the  classical  guitars  when  they  are  utilized  they  use  finger  picking  and  full  chords  to  enhance  the  darkness  of  the  music.

Posted by OccultBlackMetal at 6:53 PM No comments: 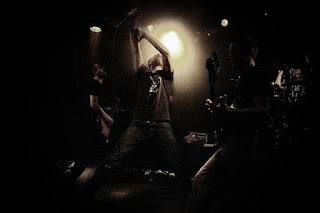 
2. How would you describe the musical sound of the new album and how it differs from previous releases?
The sound of the new album was designed to be a bit more lively and less compressed than on our previous albums. But i twas also important for us that it doesn’t sound small. We wanted a rough, dynamic and powerful sound that would fit the songs the best.


3. What are some of the lyrical topics and subjects the band explores with the new release?
Well, the way we use lyrics is maybe kind of untypical, as we focus more on the « resonance » of words than on a concept. However, the lyrics are a coherent entity with different meanings and levels of interpretation. We love them subtle, thoughtful and dark.


4. What is the meaning and inspiration behind the bands name?
There is no real meaning or inspiration. We just thought it sounded good and at the time we were really convinced that this name made sense to us.


5. What are some of the best shows that the band has played so far and how would you describe your stage performance?
We really focus on giving intense shows. There have been a lot of good shows and great memories until now an dit would be difficult to point one out.


6. Do you have any touring plans for the future?
As we all have jobs , it has become difficult to tour, but we love to play live, so we do our best to play as many shows as we can.


7. On a worldwide level how has your newer music been recieved by fans of underground music?
Pretty well. We have had a lot of good reviews and we are happy that most of the reviewers did understand what we tried to do on this album. But inevitably some others haven’t understood anything at all. Some reviews on websites or blogs are pretty unprofessionnal and we miss good quality writers and journalists who really have a strong musical background and culture.


9. What direction do you see your music heading into on future releases?
I cannot really answer this question, as we haven’t written any new material, but we’ll always try to experiment and bring new ideas in our songs.


10. What are some bands or musical styles that have influenced your music and also what are you listening to nowadays?
Common influences in the band go from metal/hardcore to indy rock, electronica or black/death metal. Some are old bands and some are new, but most of them are non-commercial bands which really bring something good and sincere on the table. We now listen to many bands. Here are some of them : Enslaved, La Dispute, Converge, Meshuggah, Andreya Triana, Melissa auf der Maur, and so on.


11. Outside of music what are some of your interests ?
Listening to music and going to concerts. When we have time…


12. Any final words or thoughts before we wrap up this interview?
Thank you very much for this interview and your interest in Unfold. We love you.

Posted by OccultBlackMetal at 10:30 AM No comments: