1.For those that have never heard of you before can you tell us a little bit about the band?
Well, the band has existed in this line-up since 2009-2010, when we started working with Martin, the drummer. Otherwise we have all been involved in various musical projects before that, some more, some less serious.
2.How would you describe your musical sound?
It's basically a combination of all four people that play in the band. We are all quite different individuals and I think this fact is also reflected in the music. We like our sound a bit dirty, but still retaining some polish, so that things don't get lost in the mess.
3.What are some of the lyrical topics and subjects the band explores with the music?
The lyrics are more or less introspective, dealing with one's relationship with society, religion, birth and death, personal stuff mostly. We've never seen ourselves as a political band or something like that.
4,The band was originally known as Expulsion, what was the decision behind the name change?
The band actually changed it's name after a 5 year pause. After some slight line-up changes and some new approaches to making music we also decided it was time to head on under a new flag.
5.What is the meaning and inspiration behind the name Mothermound?
We are somewhat fascinated by the idea of circular motion in nature. Life-death, beginning-end, it also plays n important role in our lyrics and music. The Idea behind Mothermound can be interpreted in various ways. As the Mother-mound, the main mound (Earth?) from which we all spawn and return to when our time comes, or simply as a phrase containing two words which mark the beginning (mother) and the end (mound), womb and tomb, cradle and grave.
6.What are some of the best shows that the band has played so far and how would you describe your stage performance?
We haven't done too many shows in this current line-up, but I can say we like smaller venues which are more intimate, more personal. The personal message gets lost on bigger stages for some bands. And smaller stages make us try harder and make our performances more energetic. I couls say we bas our performances on our music and not on some theatrical gymnastics background. For us it's still all about the music.
7.Do you have any touring or show plans for the future?
Well, we just released 'The Burden of Tomorrow' and we have some gigs planned to promote the thing. For now this will all be more or less limited to Slovenia, but we are also considering other options for the future. We'll see what it brings.
8.The new album came out on Hollow Earth Records, can you tell us a little bit more about this record label?
It's a young record label which doesn't limit itself musically or in any other way. It's operates in a very professional and still down-to-earth, human way. And that's the way we like it.
9.On a worldwide level how has the feedback been to your music by fans of progressive and doom metal?
Since the album was released we've mostly gotten positive feedback from everyone. We don't expect all people to like what we do and everyone is entitled to his/her opinion. But generally our work has been quite warmly accepted.
10.What direction do you see your music heading into on future releases?
I guess we will continue following the same guidelines. Some changes are bound to happen, because we are all still growing and learning and discovering new things. We'll just have to wait and see where the music takes us.
11.What are some bands or musical styles that have influenced your music and also what are you listening to nowadays?
We actually listen to a wide spectrum of music and musical genres. I could say that we have been influenced by everything from Black Sabbath to Eurythmics, from Opeth to Tom Waits. What I listen to mostly depends on the current mood or the mood I am trying to get into. Sometimes classical music comes in handy, other times Shining is on most of the day:)
12.How would you describe your views on Occultism?
I'm mostly interested in the phenomenon from a historical point of view. But practice makes things a bit different sometimes. Everything that has to do with religious or any other beliefs or views is highly personal and should be treated and respected as such. If it all remains like this it's completely acceptable and safe for everyone. If it gets out of hand it can be dangerous. Be it Christianity or the Manure Worship Cult next door.
13.Outside of music what are some of your interests?
We all have our stuff to do, concerning work or families, so it's never boring.
14.Any final words or thoughts before we wrap up this interview?
Thank you for taking interest and keep keeping an open mind.
Show message history
Posted by OccultBlackMetal at 11:30 PM No comments: 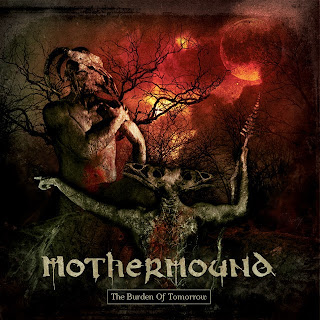 "Beings  Beyond  Being"  starts  up  with  sound  effects  before  adding  in  heavy,  melodic  and  progressive  sounding  guitar  and  bass  riffs  along  with  drums  which  also  leads  up  to  growls  and  halfway  through  the  song  acoustic  guitars,  and  guitar  solos  make  their  presence  known  along  with  a  brief  use  of  spoken  word  parts  before  getting  heavy  again.

Song  lyrics  cover  Occultism,  while  the  production  has  a  very  strong,  powerful,  heavy  and  professional  sound  where  you  can  hear  all  of  the  musical  instruments  that  are  present  on  this  recording  along  with  some  of  the  songs  being  very  long  and  epic  in  length.

In  my  opinion  Mothermound  are  a  very  great  sounding  progressive  doom/death  metal  band  and  if  you  are  a  fan  of  this  musical  genre,  you  should check  out  this  album.  RECOMMENDED  TRACKS  INCLUDE  "Aurora  Awaken"  "Beings  Beyond  Being"  "Omega  Omnipresent'  and  "Curtains  Fall".  RECOMMENDED  BUY.

Posted by OccultBlackMetal at 8:09 PM No comments: 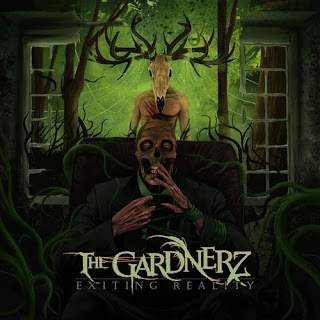 "Exiting  Reality  Part  II"  begins  with  melodic  and  technical  sounding guitar  leads  along  with  bass  guitars  and  drums  before  adding  in  heavy  guitar  riffs  which  then  leads  to  some  black  metal  screams  before  adding  in  clean  singing  and  after  another  guitar  solo  death  metal  growls  start  to  kick  in.

Song  lyrics  cover  philosophical  themes,  while  the  production  has  a  very  strong,  powerful,  heavy  and  professional  sound  where  being  a  self  released  recording  where  you  can  hear  all  of  the  musical  instruments  that  are  present  on  the  single.

In  my  opinion  this  is  another  great  sounding  recording  from  The  Gardnerz  and  if  you  are  a  fan  of  melodic  doom/death  metal,  you  should  check  out  this  single.  RECOMMENDED  BUY.
Posted by OccultBlackMetal at 3:28 PM No comments: 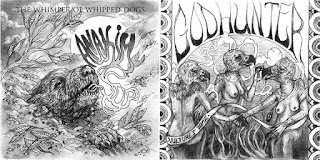 Song  lyrics  cover  hateful  themes,  while  the  production  has  a  very  strong,  powerful  and  heavy  sound  where  you  can  hear  all  of  the  musical  instruments  that  are  present  on  their  side  of  the  recording.

In  conclusion  I  think  this  is  a  very  great  sounding  split  and  I  would  recommend  to  all  fans  of  sludge.  RECOMMENDED  BUY.
Posted by OccultBlackMetal at 5:44 PM No comments:

1. Can you give us an update on what is going on with the band these days?
We just spent the better part of the last year writing, recording and preparing the new album for release, which just happened. We're playing four regional shows to support that release, then taking some time off through the holidays. Early in 2014, there's going to be a new video we've been working on, and probably another round or two of shows in the winter/spring. We'll see what happens. 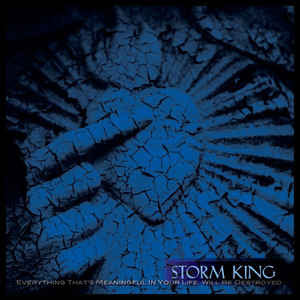 "Backfire" opens  up  with  fast  death  metal  style  guitar  and  bass  riffs  along  with  blast  beats  before  adding  in  thrash  style  vocals  and  a  few  seconds  alter  the  music  slows  down  adds  in  groove  metal  elements  and  melodic  clean  singing  before  going  back  to  a  more  death  metal  influenced  sound.

Song  lyrics  cover  hateful  themes,  while  the production  has  a  very  strong,  powerful,  heavy  and  professional  sound  where  you  can  hear  all  of  the  musical  instruments  that  are  present  on  this  recording.

Posted by OccultBlackMetal at 9:29 PM No comments:

Posted by OccultBlackMetal at 8:24 PM No comments: 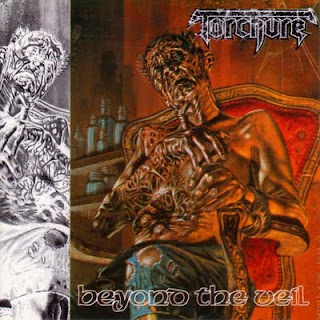 "Abysmal  Malevolence"  opens  up  with  heavy  and  fast  guitar  riffs  and  solos along  with  some  drums  and  growls  before  going  into  a  more  mid  paced  direction  as  well  as  adding  in  some  dark  sounding  melodies  before  returning  to  the  fast  parts  and  bringing  in some  blast  beats  and  then  the  music  starts  alternating  between  slow  and  fast  parts.

"Vortex  Of  Thoughts"  which  also  is  another  intro  begins  with  some  dark  sounding  synths  and  experimental  sounds  and  you  can hear  humans  breathing  in  certain  sections. 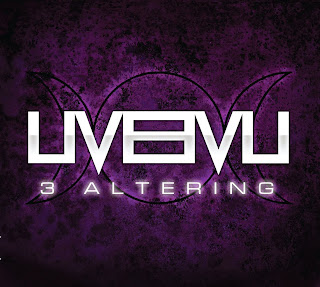 "Cause  Of  Man  Who  Killed  All  The  Idols"  which  is  the  first  song  on  the  album  starts  off  with  heavy  and  melodic  guitar  riffs  and  leads  along  with  some  electronic  music  elements  in  the  background  and  a  few  seconds  alter  industrial  style  vocals  that  also  utilize  some  melodic  parts  come  into  the  song  along  with  some  shouts,  drum  programming  and  gothic  sounding  synths.

"Spirit  And  Water"  has  its  start  with  some  trip  hop  style  synths  and  drum  programming  before  the guitars  come  in  and  make  the  song  heavier  and  then  the  song  starts  alternating  between  soft  and  heavy  parts  along  with  some  melodic  vocals  which  start  mixing  in  some  death  and  black  metal  elements  after  awhile.

Song  lyrics  cover  dark,  depressive,  poetic  and  philosophical  themes,  while  the  production  has  a  very  strong,  powerful,  heavy  and  professional  sound  to  it  where  you  can  hear  all  of  the  musical  instruments  that  are  present  on  this  recording.  RECOMMENDED  TRACKS  INCLUDE  "Cause  Of  Man  Who  Killed  All  The  Idols"  "Platonic  Blue"  "Spirit  And  Water"  and  "Saddest  Romancy".  RECOMMENDED  BUY.
Posted by OccultBlackMetal at 8:47 PM No comments: