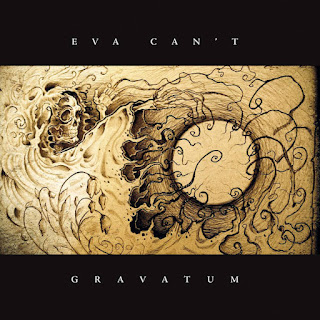 On  this  recording  Eva  Can't  moves  away  from  the  melodic  and  technical  style  of  death  metal  from  previous  releases  going  for  a  style  that  mixes  progressive  metal  with  folk  music  while  adding  a  touch  of  their  previous  style,  the  production  sounds  very  professional  while  the lyrics  cover  dark  and  poetic  themes. 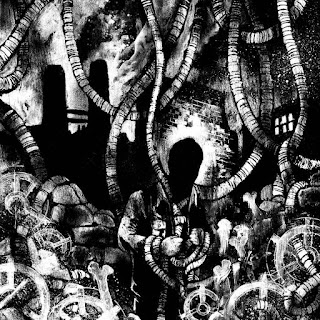 Eaten  plays  a  musical  style  that  takes  grindcore  and  power  violence  and  mixes  it  with  death  and  doom  metal  to  create  a sound  of  their  own,  the  production  sounds  very  professional  while  the  lyrics  cover  violent  and  hateful  themes. 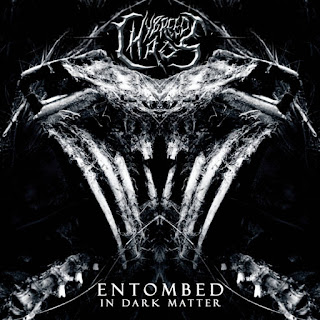 Heavy  dark  yet  heavy  guitar  riffing  starts  off  the  album  along  with  a  decent  amount  of  melodies  and  the  slow  riffing  is  very  heavily  influenced  by  doom  metal  and  after  awhile  deep  death  metal  growls  are  added  onto  the  recording  along  with  all  of  the  musical  instruments  having  a  very  powerful  sound  to  them.

Hybreed  Chaos  plays  a  style  of  death  metal  that  is  very  technical  and  brutal  while  also  mixing  in  elements  of  experimental  and  doom  metal  to  create  something  original,  the  production  sounds  very  professional  while  the  lyrics  cover  dark,  scientific  and  philosophical  themes  along  with  the  last  track  being  written  in  Frnech. 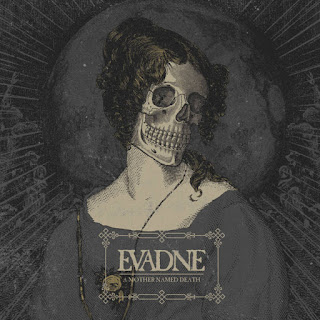 Dark  soundscapes  start  off  the  album  along  with  some  heavy  yet  melodic  doom  metal  riffing  a  few  seconds  later  which  also  mixes  in  with  the  atmospheric  synths  and  after  awhile  death  metal  growls  and  grim  screams  start  to  make  their  presence  known  along  with  a  touch  of  black  metal.

Posted by OccultBlackMetal at 5:17 PM No comments: 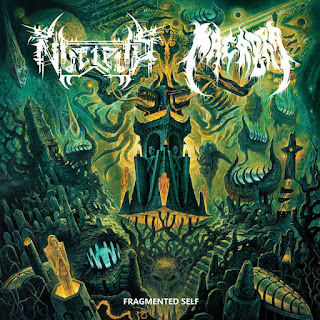 Posted by OccultBlackMetal at 11:23 AM No comments:

1.For those that have never heard of you before, can you tell us a little bit about the band?
1.The idea of the band finally materialised in December 2015 and from that point on , we are giving shape to our ideas and visions via the medium of the death metal music.
The band consists of me (Nikos) on Guitars and vocals , Fotis on bass and Vasilis on drums.
The first release is the ''Subconscious Lobotomy '' ep , recorded in late 2016 and mastered in January 2017 which contains four tracks  and approximately 22 min. of running time.
In mid April a limited to 300 units tape version of it came. More releases will follow...

2.How would you describe the musical sound that is presented on the recording?
2.Death metal blended with aggressive tech.thrash here and there.
The craft of writing our songs will follow the same path , constantly evolving but never crossing the borders of death/thrash sound.
We do not wish to experiment with our sound and attitude at all.

3.What are some of the lyrical topics and subjects the band explores with the music?
3.Horror,anguish,torture inspired by both the cinematic and literary world.
Actually the source is limitless since our everyday life can easily provide themes if you look at it from a different perspective...Needless to mention our own human psyche.

4.What is the meaning and inspiration behind the name 'Gravewards'?
4.The final destination of us all...the point that we face the eternal fear...the fear of the unknown.

5.What are some of the best shows that the band has played so far and also how would you describe your stage performance?
5.There has been no live activity as of yet...We prefer timeless rehearsals.

6.Do you have any touring or show plans for the future?
6.For the time being no.

7.The recording was released on 'Necronome Records', can you tell us a little bit more about this label?
7.Just a friend that loves our sound handling a mailorder catalogue..Simple things...
He kept 100 tapes to spread here in Greece and we ended up taking the rest.

8.On a worldwide level how has the feedback been to your music by fans of extreme metal?
8.Just great!
We thank them all for their support...Maniacs from all over the planet gathered like zombies to a feast of fresh meat!!!
Very few tapes are left as we speak...It  is very important to see people still  respecting the fact that Metal without physical copies...is just a myth.

9.Where do you see the band heading into musically during the future?
9.The next step is our first full length titled ''Eternalize the Horror''.
We will enter the studio soon for the rec.process.
Generally speaking , always working on new material...

10.What are some of the bands or musical styles that have had an influence on your music and also what are you listening to nowadays?
10.As i type my reply to you i am listening to Disincarnate-''dreams of the carrion kind''
Concerning influences...well from possessed,sadus and slayer to death,bolt thrower,obituary and all in between... i do not go to over technical,slam you name it... or anything like that.I do listen to some grind and crust acts as well.

11.What are some of your non musical interests?
11.Books full of horror-gory related themes, equally horrific movies, collecting old books. board games (warhammer),documentaries about old and underground painters/artists.. but always addicted to collecting vinyl records.. although the last is music related so skip it if you want to.

12.Before we wrap up this interview, do you have any final words or thoughts?
12.To you...Thank you for the interview and interest in GRAVEWARDS.
To the devoted death/thrashers...to expect our first album..
And finally to humanity...to embrace it's emptiness.

Posted by OccultBlackMetal at 7:41 PM No comments: 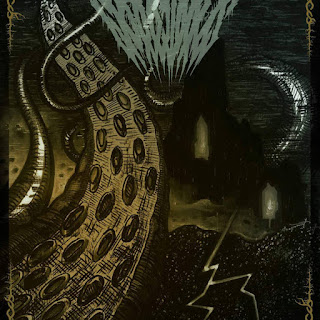 Posted by OccultBlackMetal at 3:21 PM No comments: 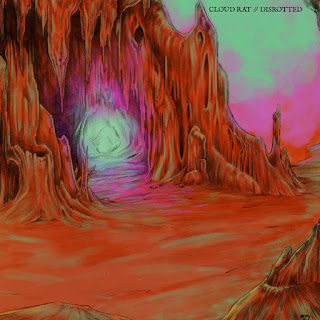 Their  side  of  the  split  starts  out  with  nature  orientated  soundscapes  as  well  as  some  elements  of  noise  and  drone  and  spoken  word  parts  are  also  utilized  briefly  and  after  awhile  the  music  goes  into  a  heavier  direction  along  with  some  screaming  vocals  and  a  touch  of  post  hardcore. 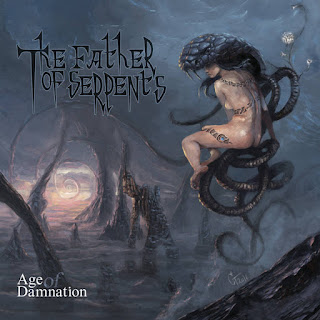 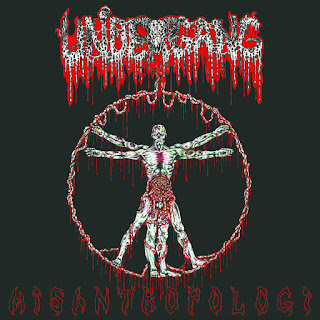 Undergang  creates  another  recording  that  remains  true  to  the  old  school  doom/death  metal  sound  of  previous  releases,  the  production  sounds  very  professional  while  the  lyrics  are  written  in  Danish  and  cover  death,  insanity,  darkness,  and  suffering  themes.

1.Can you give us an update on what has been going on with the band since the recording and release of the new album?
Hello, thanks for your interest. But nothing extraordinary.  We just rehearse, create new riffs and parts and think about future conceptions.

2.In April you had released a new album, how would you describe the musical sound that is presented on the recording and also how does it differ from the stuff you have released in the past?
Say, “Lifestories” have a fat, heavy and groovy sound. It differs from the sound of “Drunken Tales” - less subtle, more straightforward maybe. Something like this. As for us, all of our releases sound very different, but for the other listeners - who knows? Maybe for them all our albums are as like as two peas.

3.In the beginning the band was in a more melodic doom/death metal direction but over the years have evolved into more of a psychedelic stoner/doom metal direction, what was the decision behind the stylistic change?
The explanation is rather lucid: our key points and musical values had changed. By the moment of our debut album release we had already had some new groovy stuff. So, we recorded our unreleased doom/death material for “Twofaced” EP and closed this theme. When the EP was out, we completely turned away from the sound represented on the record and turned to the groove.

4.What are some of the lyrical topics and subjects the band explores with the newer music?
For example, song “Regressed” is about some dissociative or psychogenic fugue, psychiatric disorder when the person loses his previous memories and individuality, leaves his family and often removes to the other places and thinks that he is a new, another person. The other themes are life as a trick and sometimes people are not what they seem - usual stories of usual lives.

5.What is the meaning and inspiration behind the name 'Evoke Thy Lords'?
The name had occurred as a reference to H.P. Lovecraft works, later changed a range of its notions, and by now it does not have a clear definition. The one who had made it up, and everyone seeing it now – they all have their own perception of its meaning. Every man has his own gods, and the music has always been a channel to communicate with them.

6.What are some of the best shows that the band has played over the years and also how would you describe your stage performance?
As for the recent ones - it was a live gig in Tomsk city. There was a very good stage work with sound and light and good organization and line-up also. Though, there were many good concerts in the past. As for our stage performance, we... just playing? For us the music is the main thing. We try to make some physical effect on the listeners, catch them with the rhythm, that takes place, yes. Of course, some bands make a good show - I mean a show exactly. But visual theatre on stage and something like that is not about us anyway.

7.Do you have any touring or show plans for the new album?
Unlikely, we are not play-live-often-band. But a couple of gigs - may be.

8.On a worldwide level how has the feedback been to your newer music by fans of stoner, doom and death metal?
Singing the praises. We think the death metal component in our music is overestimated.

9.Where do you see the band heading into musically during the future?
Really don’t know. It’s very hard question.

10.What are some of the bands or musical styles that have had an influence on your newer music and also what are you listening to nowadays?
As for “Lifestories”, different kinds of doom metal and a touch of noise rock, may be. As for us, we’re drowning in music.

11.What are some of your non musical interests?
The most part of our interests are about music.

12.Before we wrap up this interview, do you have any final words or thoughts?
Thanks for the questions but no more words, sorry.
Posted by OccultBlackMetal at 6:46 PM No comments: 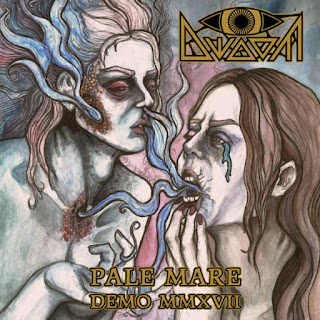 Posted by OccultBlackMetal at 9:00 PM No comments: 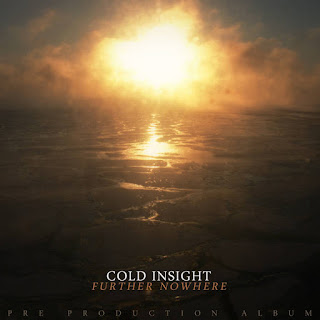 Atmospheric  synths  and  melodic post  rock  style  guitar  leads  start  off  the  album  along  with  some  doom  metal  riffing  and  death  metal  growls  a  few seconds  later  while  you  can  also  hear  all  of  the  musical  instruments  that  are  present  on  the  recording  and  symphonic  and  prog  elements a re  also  used  at  times.

Cold  Insight  plays  a  style  of  doom/death  metal  that  is  very  atmospheric  along  with  some  prog,  trance,  AOR  and  post  rock  elements  which  also  makes  the  music  more  original,  the  production  sounds  very  professional  while  the  lyrics  cover  a  cosmic  journey  through  ethereal  worlds. 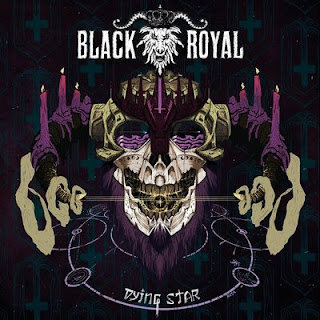 
Black  Royal  creates  another  recording   that  remains  true  to  the  death,  groove  and  stoner  metal  mixture  of  previous  releases,  the  production  sounds  very  professional  while  the  lyrics  cover  darkness and  occultism  themes.