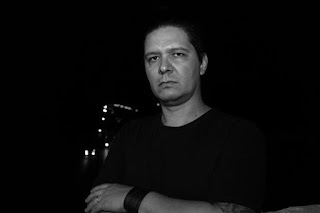 1.For those that have never heard of you before, can you tell us a little bit about the musical project?
First of all, thank you for this interview!!
Well, Deep Memories is the materialization of an old goal that I had: to compose, produce and record an entire album alone. Every time I grabbed my guitar and some good riffs came up I always recorded with my cell phone and this material kept increasing. When I realized, I already had a huge amount of material but I did not have the "courage" to face the challenge of executing all the instruments. But in the end I completed this task!

2.So far this year you have released one ep and a full length, musically how do they both differ from each other?
The EP was a promotional material released only in Brazil by Heavy Metal Rock and Misanthropic labels. This EP contains 2 songs from the full-length album. This EP managed to spread the name of Deep Memories and brought me an amazing feedback from the whole Brazilian metal scene.

3.What are some of the lyrical topics and subjects you have explored with the music so far?
In the lyrical part, the first five songs of the album talk about the same subject, they tell the story of a guy who realizes he is living his last moments of life and finally ends up dying. But to his surprise, he realizes an existential continuity after life and there are several intriguing situations happening to him. The others relate to personal experiences related to times of overcoming, loss, introspection and sadness.

4.What is the meaning and inspiration behind the name 'Deep Memories’?
When I was choosing the name for my project, I knew that it would have to be something that would involve all my knowledge as a human being, gathering all the experiences that I lived in a single name, and Deep Memories was the best one. The songs and lyrics of this project revealed my deepest inspirations and admiration for the heavy metal movement as well as my biggest psychological ghosts and an alternative post mortem view.

5.Can you tell us a little bit more about the artwork that is presented on the album cover?
We will have two different covers for "Rebuilding the Future". The cover of the Brazilian and Russian versions were made by me, and the cover of the Japanese version was elaborated by the artist Caio Caldas from CadiesArt.
The cover design was aiming at the materialization of the idea of "Reconstruction of the Future". When we think about this, we naturally reflect on where we are, where we can go, and what we need to do to get there. But I believe that giving more details about these covers would "limit" the viewer's interpretation possibilities, so I would like everyone to come up with their personal interpretation of the illustrations, reflecting on: "What would you do to rebuild your own future?"

6.On the recordings you recorded everything by yourself but have worked with a full band before in the past, how would you compare the two?
When you are in a band the tasks divide, even if only in the execution of the instruments, but when you do everything by yourself, your limit is tested all the time, who questions you is your own conscience! Throughout the process of refinement of the compositions to the beginning of the recordings, mixing and mastering, many concepts that existed in my mind of how it would be to record everything alone was changing, I saw myself much more inspired and dedicated than at the time I was in a band . It was an incredible journey!

7.The new album was released through a variety of many different labels, can you tell us a little bit more about the labels you worked with on this recording?
At the end of the mastering of the album, I noticed from the comments of the friends who were accompanying the process, that the material had gotten a much higher quality than expected. So I started contacting record labels around the world to release the album, and to my surprise, four showed up interest in releasing the material on CDs: Heavy Metal Rock and Misanthropic Records in Brazil, Invasion of Solitude Records in Japan and GS Productions in Russia. The album title is "Rebuilding the Future".
In addition to being released on CD the album will also be released on all digital platforms and Bandcamp.

8. On a worldwide level how has the reaction been to your music by fans of melodic death and doom metal?
It has been much better than I imagined! I knew the result was good, but the feedback from the media and especially the metal fans has been incredible. Every day I get messages from different countries in America, Europe and Asia. That impressed me a lot! Thank you all very much!

9.Where do you see yourself heading into as a musician in the future?
I see myself as a more mature musician and producer, giving a huge importance to small details and feelings. These little nuances bring a differential to music. Today we have many musical styles and what differs the metal from the others is that there is a soul behind each chord, each verse. I’m proud to be a musician who can express myself through metal.

10.What are some of the bands or musical styles that have had an influence on your music and also what are you listening to nowadays?
My biggest inspiration come from the bands that brought me to the metal like Iron Maiden, Black Sabbath, Megadeth and Pantera. These bands will always inspire me!
In the influences part I can mention the bands that I hear with great frequency as: Theatre of Tragedy, Bathory, Dark Tranquillity, Rotting Christ, Dimmu Borgir, Whitin Temptation, Katatonia and Hipocrisy.


11.What are some of your non musical interests?
If I take the music out of my life, there won’t be much left! But I really enjoy watching some videos on YouTube, I also spend good hours watching series! I'm a big fan of the TV series from NBC like Chicago PD, Chicago Med, Chicago Fire and Law and Order SVU.

12.Before we wrap up this interview, do you have any final words or thoughts?
Thanks to Doomed to Darkness for the great interview! To the reader who wants to know more about Deep Memories, visit our official website www.deepmemories.com.br or our social networks: Facebook: @deepmemoriesbrazil and Instagram: @deepmemoriesbrazil

Posted by OccultBlackMetal at 4:27 PM