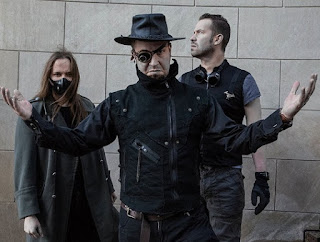 The band has been in the pipeline for some years, Dan (the drummer) and myself (Steve - Guitar/Vox) are twins and always promised ourselves we’d get create a band that captured the scope of all the computer game music we listened to in the late 80’s early 90’s. Whilst Dan studied in Japan, I sent him some demos, he told me which songs were in the shared perception of our childhood. When he got back we learnt to play the demos and wrote the rest of the album. Our first bassist was someone I’d worked with extensively before but then we were lucky enough to find someone just as nerdy and doom oriented as ourselves to play bass in Jon when Ben emigrated (not because of us!)

2.How would you describe the musical sound that is presented on the album?

It’s Symphonic Death/Doom metal if we’re looking for a genre classification but more importantly it’s large. Very large. As the saying goes ‘Big League’. We did whatever we could to make the record sound as epic in scale as we could and yet be hooky and memorable – something that a lot of newer metal dispenses with in favour of fucking with peoples ears.

The themes are about the dark nature of humanity in its quest for survival each written as a short story. ‘Retake Mars!’ deals with the inevitable war that will be fought for it should we try to fully colonize it where as ‘Milk and Oil’ is about the disastrous lengths a husband will go to for a wife who has lost their child during childbirth. A gallery of humanity's desperation and failures.

4.What is the meaning and inspiration behind the name 'Spectral Darkwave'?

In keeping with our science of evil vibe, we always imagined it as ‘the moment you scan something unknown on the edge of space and look at your readings, but there is a massive absence of information - because it knows you’re there… and your next!’ Oh, the horror of THAT moment…

Best shows - we once had everyone who watched our show move into the middle of the room for the best stereo image of our nukes and other audio fireworks we bring live. In fairness, our stage show, though themed on observing human horror and suffering tends to become a rather black shared joke that only nerdy metal people tend to get.

6.Do you have any touring or show plans for the future?

We will be supporting the record with shows across the UK in April-June then toward the end of the year. Off the back of this we hope to secure some festival slots next year. Maybe we’ll get invited to Europe.

7.The new album is coming out on Occidental Records, can you tell us a little bit more about this label?

It’s our own label so they can wind-up the company not us personally when we go massively into debt trying to make the difficult second album! It suits our purposes to formalise our arrangements in the long term but maybe as we grow then the roster of Occidental may grow too.

8.On a worldwide level how has the feedback been to your music by fans of extreme metal?

Well it’s all very early in the promotion cycle for us at the moment so no one knows we exist in the vast ocean of music out there. When we’ve had radio play on tbfm online, people taking the time to come and speak to us after our UK shows and early reviews – everyone has been really positive. Which I find really weird. I know it’s good in principle and that we’ve worked hard at it. That’s about it.

We’ve written most of the next record already and it’s shaping up to be even more about story-telling than ‘Last First Contact’. We’re going to bring in some more electronic elements and some more really interesting use of tribal percussion in songs like ‘A Season of Abyssal Screams’ - which is about Mayan human sacrifice. We hope that people will want more of the same on the second record but with even better production values.

Initially, Rammstein’s slower stuff was a big influence for Dan and myself, but then someone put me on to Opeth’s Blackwater Park and we realised that great metal could twist and turn and be a journey rather than be all about the shred. These days we’ll on a fairly (un)healthy diet of Draconian, Devin Townsend and The Vision Bleak.

11.Does Occultism play any role in your music?

Not directly - we view occultism as just one way human intelligence has tried to negotiate the problems of it’s own existence with the limited information it can gather through 5 senses. Such is humanity’s selfish nature that much new thought was historically treated as ‘the work of the devil’ and punished by those in positions of power. Smart people tend to fall into two camps - those know when they do not know and those that pretend they know in order to exploit the ignorance of others. There is definitely an unwritten Spectral Darkwave song in it.

Dan is a bit of a drum animal but is also the most likely of us to hit the gym, Jon studies Historical European Martial Arts and between the band and teaching Film and TV, I’m lucky if I can get a few games of Pro Evolution Soccer on my Xbox just to zone out entirely.

Enjoy the light you live in, make the most of it whilst you spark in the darkness, you are the nerve endings of the universe.
Very. Lucky. You.
Posted by OccultBlackMetal at 11:08 AM