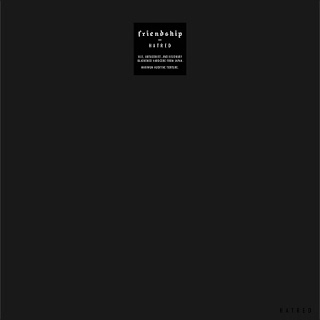 Brutal  blast  beats  and  distorted  amp  noise  start  off  the  album  before  going  into  a  very  fast  grindcore  direction  which  also  introduces  crust  style  growls  onto  the  recording  along  with  the  heavier  sections  of  the  songs  being  very  heavily  influenced  by  sludge  and  doom  metal  and  a  great  portion  of  the  tracks a re  very  short  in  length.

Friendship  creates  another  recording  that  remains  true  to  the  grindcore,  power  violence,  sludge  and  doom  metal  mixture  of  previous  release,  the  production  sounds  very  professional  while  the  lyrics  cover  violent  and  angry  themes.

Posted by OccultBlackMetal at 5:18 PM