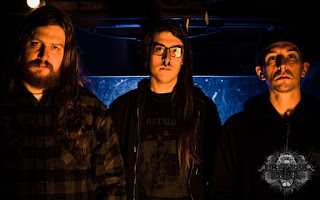 We are a 3 piece doom band hailing from Philadelphia, we lean towards the filthier death doom to sludge and noise side of things. Harsh vocals, baritone tuning, and ignorant riffs with elements of other nefarious genres.

2.In March you had released your first full length, musically how does it differ from your previous split's and ep?

Some of the material was written around the same time to be honest. But this album as a whole captures a more definitive representation of our goals musically.

3.What are some of the lyrical topics and subjects you have explored so far with the music?

From personal stuff like the human condition, suicide and mental illness to more fanatical fiction based horror/sci-fi shit.

4.What is the meaning and inspiration behind the name 'Moros'?

It’s the Greek being of impending doom....

5.Can you tell us a little bit more about the artwork that is presented on the album cover?

Ethan McCarthy (@thecoolghoul)(Primitive Man) designed the art work and layout for us. To me the art kinda reminds me of having a panic attack and thinking about all the fucked up shit I’ve ever seen or been through.


6.What are some of the best shows that the band has played over the years and also how would you describe your stage performance?

We’ve played with tons of sick bands over the years but the one time we opened for Danzig here in Philly sticks out as a mind fuck for sure. Usually our shows are at much smaller sweaty venues and on a good night we get nice and fucked up and we rip through our songs and encourage the crowd to abuse each other.


7.Do you have any touring or show plans for the future?

We will tour in the not so distant future but unfortunately it’s too early to say when. Keep an eye on our Instagram (@moros_doom) and Facebook for show announcements.


8.You have been a part of some splits with 'Lithotome' and 'Black Urn', what are your thoughts on the other bands that had participated on those recordings?

Both of those bands are great but unfortunately both projects are now done. The Black Urn boys have moved on to a new project called ‘Caged’ and ‘Lithotome’ mastermind Alex Poole has been running with many projects including Skaphé and Chaos Moon as well as his label Mystikaos who I highly suggest checking out!


9.The new album was released on 'Hidden Deity Records', can you tell us a little bit more about this label?

Hidden Deity is a pretty new label run our buddy Matt from around our area. His only other release so far is from a legendary Philly band ‘Rosetta’ - I’m not sure what they have in store for the future but working with Hidden Deity was drama free.

10.On a worldwide level how has the reaction been to your music by fans of sludge and doom metal?

Over seas fans have been very complimentary... we have a small but surprisingly growing amount of support from European fans. We definitely would love to tour there one day.

11.What is going on with some of the other bands or musical projects these days that some of the band members are a part of?

I play drums in Krieg who hopefully will be starting the process of a new record in the winter and Nauseator who will be releasing a split on Hells Headbangers in the near future.

12.Where do you see the band heading into musically during the future?


13.What are some of the bands or musical styles that have had an influence on your music and also what are you listening to nowadays?

14.What are some of your non musical interests?

15.Before we wrap up this interview, do you have any final words or thoughts?

We have a few songs already done for a future release which is still in early planning stages, maybe a split maybe a sick tape, maybe both....more on that later! Thanks for the support! -Jay

Posted by OccultBlackMetal at 5:12 PM