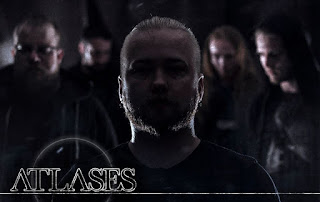 1.For those that have never heard of you before, can you tell us a little bit about the band.?
-Atlases started as a one man "band". I had written some songs for the next Oceanwake record, but those songs turned into this project. Little by little I gathered some local musicians around me, and Atlases was born.

2.Recently you have released an ep, how would you describe the musical sound that is presented on the recording?
-We call ourselves Modern Post Metal. It's a bit of a cliche and joke, but that term fits the most. The word, atmospheric, is also very suitable for our music. We are within the Post Metal genre, but our overall sound is a bit more modern.

3.What are some of the lyrical topics and subjects the band explores with the music?'
-Distorted images of self. Stories about our surroundings in "I" form. Very dark and misty. Cold and hopeless.

4.What is the meaning and inspiration behind the name 'Atlases'?
-There's no deeper meaning with the name. It just came to my mind, and I thought it would be a cool name for our band. Atlases suites to our music as a name the best. After we formed the band and decided the name, we found out that there is a band called Atlases in UK. They play more like djent-style of metal, and they haven't been active since 2013 or something. So I think we are going to keep our name in the future also.

5.What are some of the best shows that the band has played so far and also how would you describe your stag performance?
-The band is quite new. So there's not so much to tell about it. We have done a couple shows now to promo our EP. I think the best shows are yet to come.

6.Do you have any touring or show plans for the future?
-We are touring in Finland as we speak. Something like 5 shows to come at the end of the year. In February 2018 we are touring the Baltic region. Estonia, Latvia and Lithuania. After that we have more shows in Finland to do.

7.The ep was released on 'Pest Records', are you happy with the support that they have given yo so far?
-Yes we are.

8.On a worldwide level how has the feedback been to your music by fans of post  metal?
-Actually we are currently waiting for the reviews to come. The messages within our facebook inbox is slowly filling with positive feedback. We thank them for that.

9.When can we expect a full length and also where do you see the band heading into musically during the future?
-We have loads of new material written already, and we are writing more all the time. The next release could be an EP or LP. I don't know when this is going to happen. We are planning something special for the Baltic tour, that I can say. Musically the new songs are a bit more sludgier, but still very ethereal.

10.What are some of the bands or musical styles that have had an influence on your music and also what are you listening to nowadays?
-Every bandmember has their own favorites. Some listens to Chelsea Wolfe and Mastodon, some listens to Riverside. My own favorites are bands like Cult Leader, Converge, Amenra, Everything In Slow Motion, If These Trees Could Talk...I think we get influences from our favorites, and try to make something new and own from it.

11.What are some of your non musical interests?
-Family life and work.

12.Before we wrap up this interview, do you have any final words or thoughts?
-Buy our music from what ever platform you like. Only that way there's a continuum to what we do. Support the band by coming to the shows.

Posted by OccultBlackMetal at 8:54 PM