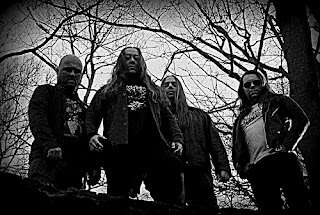 GRACELESS is an old school death/ doom metal band from Leiden / The Netherlands. Founded by Remco Kreft, best known as guitarist of Soulburn,  in june 2016. GRACELESS was raised out of the ashes of Nailgun Masssacre and Xenomorph.

2.How would you describe the musical sound that is presented on the album?


3.What are some of the lyrical topics and subjects the band explores with the music?

Well, it is death metal so the lyrics are about the fun things man do each other. Like: murder, war, rape, torture and religion. But we don’t have one theme. It has to fit te song and it has to be brutal.

4.What is the meaning and inspiration behind the name 'Graceless'?

I think it suits the music just fine. We play primitive blunt and simple death metal, and that is Graceless. Apart from that, it just sounds great.

Graceless only did 6 shows, we just getting started. But I think the gig with Vallenfyre in Iduna Drachten was the best we did so far. Great venue, great sound. I think Graceless is very solid and convincing live band that always gives a 110%. We like to raise the roof of every fucking venue. Death metal needs to be rough, and a gig is a battlefield for us.

6.Do you have any touring or show plans for the future?

Yes we do. We have some gigs in our home country in December, and we will be touring in 2018 for sure, to promote Shadowlands. We also play at Schoonebeek Death Fest Open Air 2018.

7.The album was released on 'Raw Skull Recordz', can you tell us a little bit more about this label?

8.On a worldwide level how has the feedback been to your music by fans of doom and death metal?

Graceless is just getting started (june 2016) and we haven’t even have our album out yet, but the responses are overwhelming. We got a lot responses on facebook and youtube and we have  the feeling people are really looking forward to our debut album.

9.Are any of the band members currently involved with any other bands or musical projects these days?

Yes they (we) are. I also play in Soulburn with Bob Bagchus, Eric Daniels (both ex Asphyx) and Twan van Geel (Legion of the Damned), Marc has an Iron Maiden tribute band called Iron Laiden and Bjorn has a side project named Master We Perish.

10.Where do you see the band heading into musically during the future?

I really don’t know. But we have set goals; We want to make a record every 2 years, we want to play live a lot and we want to take the band to a next level on every part.

11.What are some of the bands or musical styles that have had an influence on your music and also what are you listening to nowadays?
The bands that infuenes us are the bands we still love to listen to today. Bolt Thrower, Asphyx, Autopsy, Paradise Lost, Obituary. But we also like the classic stuff, like Judas Priest, Dio, Black Sabbath, Maiden. And you got some great new bands too, like: Krypts, Coffins, Temple of Void, Vallenfyre, Skeletal Remains and Death Breath. And you got to listen to Voracious Sourge from my buddy Aad Kloosterwaard (Sinister), that is some brutal shit!

13.Before we wrap up this interview, do you have any final words or thoughts?
I hope everybody who loves OSDM finds his, or her, way to our debut album Shadowlands. It is an album where we put in all of our heart, soul, blood, sweat and tears and we are very proud to realse this beast upon mankind. Horns up to all of our friends!

Posted by OccultBlackMetal at 4:15 PM