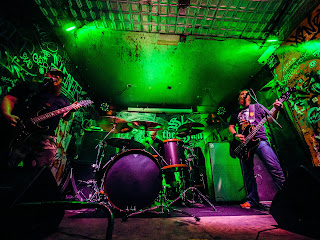 1.Can you give us an update on what has been going on with the band since the recording and release of the new album?
The album was just released, officially, about two weeks ago. We played with Weedeater back in September and sold quite a few copies to folks who checked us out then, but otherwise our main focus has been an album release show on November 18th. We’re playing in the near-by college town of Kent, OH at a great space known as the Stone Tavern at Michel’s. Our good friends in goosed and Night Goat are playing as well. We’ll be performing the record front to back and it’s going to be fun.

2.Recently you have released a new album, how would you describe the musical sound that is presented on the recording and also how does it differ form the stuff you have released in the past?
Acceptable Level Of Misery is our third LP and continues to display the type of heaviness we’re after – a bottom-heavy sludge that draws from many influences (including stoner, doom, noise rock, and grind). In the 10 years we’ve been an active band, we’ve stayed pretty true to our sound. I’d say the lyrics are little more abstract on this record than they were on 2012’s Accelerated Rate Of Decay.

3.This is your first album in 5 years, can you tell us a little bit more about what has been going on during tat time frame?
My (Jason) wife and I had a couple of kids since 2011 and everything just sort of slowed down. In that five years, we practiced nearly every week and we played a handful of gigs every year (playing with the likes of EyeHateGod, Deafheaven, and Weedeater to name a few). The songs that make up Acceptable Level Of Misery were written over that time and we actually recorded it all back in the summer of 2016. It took us more than a year to finalize lyrics, art, and the mix.

4.What are some of the lyrical topics and subjects the band explores with the music?
We tend to tell stories about apocalyptic scenarios: disasters (both natural and man-made), famine, disease, war, etc. We also have a more surreal side with songs like Lichen off our first record or Zenith from Acceptable Level Of Misery, where we let imagination take us to a strange place beyond fiction.

5.What is the meaning and inspiration behind the name 'DeathCrawl'?
Dave and I were working on another project that was destined to fail due to an inability to keep a steady drummer (Dave was on guitar initially). Dave switched to drums to try to at least get an EP recorded out of the ashes and lamented the songs were too fast and/or complicated and that he wished we had written slower songs that sounded like someone crawling to their death. That was it. We scrapped the songs we'd spent about 9 months on and started writing the first DeathCrawl songs. Damon joined shortly thereafter. We tuned low and played slow at first, but it didn't take long for us to start speeding up.

6.What are some of the best shows that the band has played over the years and also how would you describe your stage performance?
We’re a no-frills live band. We don’t have a fancy light show, or any multimedia aspects. What we do have are the three of us and our amp stacks and drums. Damon plays a full stack, I play through two bass stacks, and Dave built himself a gigantic drum set that barely fits on some stages we’ve played. We push a ton of air and people seem to dig it. As for best shows, we played a really fun dive bar in Wheeling, West Virginia that was a blast because the kids there had a vibrant scene and everyone was into it. We once played a blowout for my birthday where both my bands were on stage at once as we slogged through some heavy covers at a little dive bar in Akron, and that was a ton of fun. Both times we played with Weedeater were great as well as far as crowd response goes. Anytime we’ve been able to share a stage with Bridesmaid from Columbus, OH has been a great time to.  Truthfully, we don’t play a ton of gigs these days and those we do – we make it count. We play with bands we respect and every show since has been a good time. Ohio has a ton of fantastic bands that we’re happy to consider friends.

7.Do you have any touring or show plans for the future?
It’s almost impossible for us to tour – we’re weekend warriors at best. As for upcoming shows, we have our CD release show on November 18 at the Stone Tavern at Michel’s in Kent, OH, and then we’re playing a party in January along with our good friends in Axioma and some others TBA at Now That’s Class in Cleveland. We say it every year – we’d love to get out of town (Pittsburgh?, Columbus?, Chicago?) in 2018, but only time will tell if we can do it. Our last out-of-town was already more than two years ago, with Battle Axe in Columbus.

8.On a worldwide level how has the feedback been to your music by fans of sludge and doom metal?
Response has been good, but it’s hard to get your name out there without a big promotional budget that we just don’t have. We’ve had huge support from The Sludgelord over the years. Aaron runs a great blog over there and has been very kind towards us. Back in the early days of the band, we had some interest from an Israeli label to put out a split, but we wound up self-releasing our contribution after we stopped hearing back from them. I’m not sure it’s much of an indication of popularity, but it didn’t take the Russian hackers long to put up .RAR files of Acceptable Level Of Misery.

9.Are any of the band members currently involved with any other bands or musical projects these days?
I play bass in a heavy rock band called supercorrupter. Dave runs a studio by the name of Bad Back Studios up in Cleveland. He’s worked with the likes of Fistula, Midnight, Gluttons, and Brain Tentacles to name just a few. He’s also playing guitar in a hardcore project that’s still incubating, and he’s the bassist for Cleveland thrash legends Soulless, whom seem to be on hiatus at the moment. Damon doesn’t currently play in any other bands.

10.Where do you see the band heading into musically during the future?
We’ll keep writing heavy riffs and figure out some words to scream over them, and then we’ll drag our thousand+ pounds of equipment out to a few clubs a couple of times a year and do it live.

11.What are some of the bands or musical styles that have had an influence on your newer music and also what are you listening to nowadays?
Neurosis, Godflesh, and Crowbar are the obvious influences on us. Other influences are far and wide – anything from Steely Dan to AmRep Noise Rock. As for new releases, I have found a lot to enjoy in 2017, including the new Chelsea Wolfe, Pachinko, and Unsane albums to name a few. I’m really excited to hear the goosed record that’s coming out hopefully soon, and equally excited to hear the new Pillärs record (killer sludge/punk from Cleveland). We try to keep up on new releases – it’s easy to turn into the guy that hasn’t been inspired by an album in over a decade by losing touch with what’s happening out there.

12.What are some of your non musical interests?
Sci-Fi/Dystopian cinema/literature, Making (and consuming) beer, old cars and motorcycles.

13.Before we wrap up this interview, do you have any final words or thoughts?
We’re sitting on a couple of songs we initially tracked back in 2011 that I hope we finally finish and release for free on Bandcamp in 2018. These tracks were intended for a split that never happened and were forgotten about as we got more focused on recording Acceptable Level Of Misery. Keep an eye on our bandcamp site (http://deathcrawl.bandcamp. com) to grab that once it does become available. Thank you for taking an interest in us spreading the word about DeathCrawl!

Posted by OccultBlackMetal at 2:54 PM