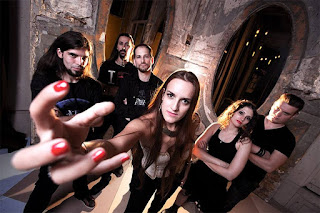 1.For those that have never heard of you before, can you tell us a little bit about the band?
Dömötör Gyimesi: Dreamgrave was a project born as a traditional 90s gothic metal band of mine, and founding member Zoltán Tamási. The name stayed, and while I rebuilt the band several times from scratch my musical interest also moved towards a more progressive sound. In the 2012-2016 era - where I date the emergence of the real band known as Dreamgrave to - finally became a solid act.

2.How would you describe the musical sound that is presented on the recordings?
Dömötör Gyimesi: our sound marries traditional progressive metal with influences of symphonic, gothic, extreme metal and jazz, featuring female soprano vocals alongside both clean male singing and death metal growls. Doesn't say much, right? We're musical storytellers. I think we definitely have a unique approach of how we use different musical ideas to express the emotional roller-coaster, which I can call the most important objective of Dreamgrave.

3.The band has been around since 2009 but so far has only released a demo, one full length and and an ep, can you tell us a little bit more about the gap in between releases?
Dömötör Gyimesi: though the spine of our debut LP Presentiment was ready years before we released it, it was extremely difficult to find the right people who can participate and play on the record. I really wanted to not become a one-man band. I wanted to do something unique and fresh. The years before 2012 gone wasted in stagnation. That's why we date the start of Dreamgrave to 13th of September, 2012, to the first rehearsal when Marcsi, János and I started to work on Presentiment together.

4.What are some of the lyrical topics and subjects the band explores with the music?
Dömötör Gyimesi: if you take a closer look on Presentiment or Monuments you'll realize that we always work our ways around a more or less abstract concept, which not just adds an extra layer to the mood and atmosphere to our music, but keeps it open to the listener's imagination. The thoughts we've put into the records are clearly perceptible by taking our physical releases, walking through the texts and lyrics in the booklets and traveling the journey we invite the listener to.

5.What is the meaning and inspiration behind the name 'Dreamgrave'/
Dömötör Gyimesi: Dreamgrave is about dancing on a blade’s edge: every human being is driven by high hopes and dreams. The longer one fights for those dreams, for self-definition, pursuing pure happiness the more fragile they become, the more their dreams get vulnerable and at the end even the strongest are able to give up. Dreamgrave is the very place where these crystallized and invaluable efforts remain and tempt forever.

6.What are some of the best shows that the band has played over the years and also how would you describe your stage performance?
Peter Gilian: to be honest, for us every show has some special vibe to it. Connections born between the audience and us, on a metaphysical level. That's why we can't choose between club concerts or big festival shows, we rock both damn hard! In a couple of months we'll release a live video taken earlier this year in Budapest. That will worth a thousand words.

7.Do you have any touring or show plans for the future?
Dömötör Gyimesi: we plan two different tours for next year in the EU. Things have changed a bit since we started negotiations with our new label, so fingers crossed!

8.The ep was released on 'Prog Heaven Hungary', Can you tell us a little bit more about this label?
Dömötör Gyimesi: it's Hungary's one and only progressive music label, mainly focusing inland. It's a small DIY label and a concert tour.

9.On a worldwide level how has the feedback been to your music by fans of progressive, goth and doom metal?
Péter Gilián: reviews and feedback from both the media and the fans are great! With Monuments we see a much wider audience has started to recognize our music. Of course there are some people who expected more heaviness. They can relax, as the first chapter of the Monuments trilogy we've just released is the softest one of them!

10.Are any of the band members currently involved with any other bands or musical projects these days?
Dömötör Gyimesi: Dreamgrave shares Tomi, our drummer with various killer bands like MYTRA, Niburta and All But One. Peti is also involved in some alternative bands.

11.Where do you see the band heading into musically during the future?
Dömötör Gyimesi: we already have several ideas pinned down for the next chapter in the trilogy. As for now the demos show some more extreme, yet psychedelic direction, and there's an agreement in the band that we'll keep feature new instruments on every record.

12.What are some of the bands or musical styles that have had an influence on your music and also what are you listening to nowadays?
Dömötör Gyimesi: I don't really know. I'm quite certain that every single album we're listening to and like will somewhat influence the melodies, the structures and the overall feeling of the songs we create. We all are coming from really different musical backgrounds: Marcsi is huge fan of Anneke van Giersbergen, and have black metal roots, but also loves Hungarian folk music and has an academic degree in singing. Tomi is more into modern metal, while Peti would vote here for jazz, whilst Krisztina for classical music and Volbeat! :D Dreamgrave is a damn melting pot, you see? My roots are coming from the late 80s and 90s: early Paradise Lost, Alice Cooper, a lot of hair metal (I love Warrant!) and my favourite guitarist is Eddie Van Halen. Of course we have several common idols, like Opeth, Steven Wilson, The Gathering, Paradise Lost, Katatonia, Anathema. In these days I'm personally really into Leprous for example.

13.What are some of your non musical interests?
Dömötör Gyimesi: Krisztina started to do paintings a couple of months ago and she also studies playing the cello. Marcsi, Tomi and Peti are doing music for a living and they are really into it, I mean they are 100% dedicated for it. My free time is totally consumed by making the band running: doing the management, graphical, video works, composing, and shitloads of teeny-weeny stuff. When I have enough of running the business Krisztina and I are touring Europe with my motorcycle and cornering in the mountains.

14.Before we wrap up this interview, do you have any final words or thoughts?
Dömötör Gyimesi: I always try to emphasize how important is to support good and independent bands. It's the ONLY way you can keep metal a fresh and living thing, so keep it up!
Live your dreams with full of your hearts, bury yourself deeply into good music and never give up!

Posted by OccultBlackMetal at 8:39 PM