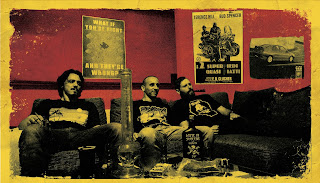 1.Can you give us an update on what has been going on with the band since the recording of the new album?

Hello. At the moment we’re fully focused on the promotion of “Italian Mysteries”: just last weekend we finished to record the first videoclip of the album and in the next weeks will be ready also our new merchandise, that will be shown on our release party of late December.

In the meanwhile, we also started to plan our booking season for all 2018 and we’re working on our new material. It’s a quite busy period ahahha.

2.You have a new album coming out later in November, how would you describe the musical sound that is presented on the recording and also how does it differ from the stuff you have released in the past?

The new album is absolutely more doom and blues. D-beats and blasbeats are still present but with this album we tainted even more our “grind ‘n’ roll” with stoner rock influences.

It came out naturally: we had no fear to re-think again the whole sound of the band, mixing our grindcore roots with our current listenings and we love what came out.

The sound itself it’s heavier and warmer than the past releases, thanks also to our Orange amplifiers, and we’re really proud of this release, probably our best record ever made.

3.What are some of the lyrical topics and subjects the band explores with the newer music?

As the title suggest, “Italian Mysteries” talks mostly about Italian past crime chronicles. We shifted our interest from pulp/thriller movies to real facts, many of them not completely clear so far, because sometimes reality overcomes fantasy and there are many terrible real stories to tell of which people ignore or just don’t remember.

4.What is the meaning and inspiration behind the name 'Rabid Dogs'?

Our moniker is a tribute to “Cani Arrabbiati” movie by Mario Bava, one of our favourite movies ever. A milestone for every pulp addicted, 20 years before Tarantino’s “Reservoir Dogs”.

5.What are some of the best shows that the band has played over the years and also how would you describe your stage performance?

For sure our live set at Obscene Extreme Fest 2015 was epic: to be on the most important stage in Europe for extreme metal band isn’t something that happens everyday. Also Coyote Brutal Fest in Moscow was great! Don’t know if these were our best shows ever but for sure we enjoyed a lot.

Everytime we go on stage we give everything for our fans and, last but not least, for ourselves: we wanna have fun and involve the audience; we drink and smoke with them, jump, shout, laugh etc in a word… it’s a party!

6.Do you have any touring or show plans for the new album?

Sure we have! We’re already working on tour plans for all 2018: we wanna bring our new songs everywhere and we’ll do all that we can to tour as much as possible.

7.The new album was released on 'Eclectic Productions', can you tell us a little bit more about this label?

Evgeny from Eclectic Productions proved to be a good friend, serious and sincerely inerested in our band. He was the one who strongest wanted us and if we have our album out just 2 months after the final mastering it’s thank to him. A trustworthy man for a serious label, which always respected our deals, a thing not so taken for granted in the underground scene… unfortunately.

8.On a worldwide level how has the feedback been to your music by fans of stoner rock and grindcore?

The feedback seems good: at the few concerts taken so far with the new setlist people reacted well.

Of course the die-hard grindcore/punk fans will turn their nose up for the stoner parts but we don’t care at all… we never did to be honest: we play the music we feel, that’s important for us.

I don’t really know. I’d like to say that we’ll get famous and rich but more probably we’ll be searching for food in a rubbish bin.

Nowadays we’re more into stoner/doom, but our love for crust and grindcore is still the same.

Cinema and fitness: our hidden dream is to become a band of bodybuilders.

Sure man! First of all thank you for this interview, it was funny to have this small chat. Then a big “see you soon” to all our friends all over Europe: check out our website www.rabiddogs.it or our Facebook profile coz there’ll be tasty news out soon!

Posted by OccultBlackMetal at 9:54 AM