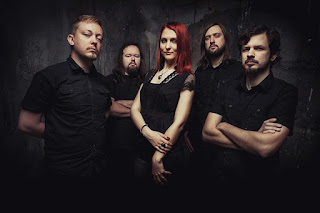 Ex Animo is a Ukrainian metal band located in Kharkiv, our music is a specific mix of genres based on musical tastes of every member of the band, someone can describe our style as dark/doom metal, but actually we are just trying to find that golden ratio, our common vector in mixing the aggression and melody of metal music.

“Neverday” has aggressive but yet melodic metal sound. Each song has it’s own mood and pace, nevertheless we’ve tried to maintain the dark atmosphere of the album.

If you compare it to our previous release you will find nothing in common. Of course, there are years between them, our views and our tastes have changed. “Neverday” is that mature release that gives a form to Ex Animo and outlines its musical direction.

3.The band has been around for 16 years but so far has only released an ep, single and 2 full lengths, can you tell us a little bit more about the gap in between releases?

Yeah, that is a painful topic for us. Since 2008 we’ve been constantly experiencing some lineup issues, which made not only the recordings but even rehearsals a hard task. In fact some of the songs from the “Neverday” album were written around 2008 - 2010. Recordings were conducted from time to time since then but never finished the way we wanted our songs to be, so we had to start the process again and again. We’ve managed to release the “Soulglass” EP out of that stuff but still were not fully satisfied with the result. We still had too little experience and too many expectations. In the end we came up with the more mature sound, composition and lyrics for both old and new songs and we are really glad that the album is finally out and we can move on.

4.What are some of the lyrical topics and subjects the band explores with the music?

It can be any topic that feels right when you’re listening to your newly-written music. But we always apply our personal experience to every story behind the songs and try to make it as much personal as possible.

5.What is the meaning and inspiration behind the name 'Ex Animo'?

Well, from the very beginning we were trying to do everything based on our feelings and not to pay too much attention to current trends or demands in the music world. “Ex Animo” literally means “from the heart”. I remember one day in the early 2000s we just accidentally stumbled into this phrase in some of the latin dictionaries and realised “Wow this can be a cool name for the band!”. The kind of name that precisely describes the way we are writing our songs, this can even be called our motto, when making any kind of band related decision we are guided by this name. “Let’s do it in Ex Animo way” we say, and you already know what to do, almost all the time, ha ha.

Our best shows are yet to come we hope, in general we like most of the gigs we’ve played, all of them were cool in their own way. Can’t come up with a specific one here.

Regarding the stage performance I would describe it as natural, as with the music we are trying to behave and act in the way we feel in that very moment, the “Ex Animo way” you know. We are mostly concentrated on outlining our music and giving it to our listeners in it’s best, that’s usually the high priority, at the same time we leave some space for experiments here.

Currently we are looking for the possibilities to present our album in the major Ukrainian cities. First show after the album release was in Kharkiv, our native city on April, 22. Further plans are unclear yet.

8.On a worldwide level how has the feedback been to your music by fans of the more dark and extreme sides of metal?

Most of the time we receive very nice feedback, our listeners are very supportive and this means the world to us! We believe that our songs combine enough elements of different genres to appeal to people with the diverse musical preferences, even though the fans of more extreme metal usually dislike female vocals.

So far it looks like our music will become more aggressive and heavy in future. Although, we’d like to experiment with acoustic and electronic sounds as well.

Oh, that’s a huge list that basically covers almost all of the metal and non-metal musical styles. As for the bands that influenced us the most we can list such names as: Anathema, Moonspell, Metallica, The Gathering, Black Sun Aeon, October Tide, Swallow the Sun, Paradise Lost, Therion, Katatonia and many more.

It’s funny, but almost everyone in the band is interested in photography. Besides that comes science, art, traveling, even work (sometimes).

We would like to encourage people to explore new music, new bands and styles. Don’t be afraid to experiment, not only it gives you a better vision and understanding of the musical world and boosts your creativity, but also gives a chance to the bands like Ex Animo to be heard. There are hundreds of talented musicians waiting for you to discover them, so give it a try. And remember that it’s always better to listen to your heart, not to others. Cheers!
Posted by OccultBlackMetal at 2:33 PM