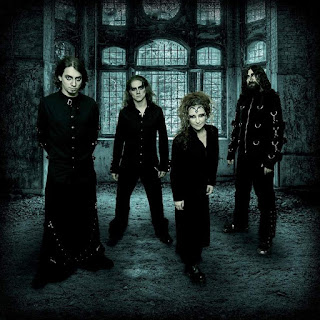 Very little Metal music was broadcasted and performed in Romania in the mid 90’s and Dan Dron (guitar and vocals) strongly believed that his creative abilities would better come to light if a band was formed which will establish the new face of gothic metal in our country. In light of his desire, he formed the band Kratos in the fall of 1996, aspiring at bringing gothic style music on the Romanian stage.

The first noticeable release was “The Essence”, a demo composed and recorded in 1997. After the release of the demo, several radio and television interviews followed which led to participation in metal festivals around. The performance was awarded and applauded in local and national magazines.

By 1999 we were already a well-established and known band in Romania. It was now time for our first LP. “Looking behind the mirror…” was released in mid 1999 and immediately we started a set of tours to promote its music in Romania and abroad. The band also started to re-tool itself and take full advantage of the opportunities available in gothic music by introducing symphonic elements in our composition. Atmospheric passages became darker and overall the music became more incisive.

Dan Dron remains the band lead and he is accounting for almost all the Kratos compositions. In ’99 Monica Barta joined the band as female vocal and since 2012 she is also the band’s bass guitar player. 2012 is also the year when Iustin (guitars) and Catalin (drums) joined the band completing today’s Kratos lineup.


2.You have a new album coming out, how would you describe the musical sound that is presented on the recording and also how does it differ from the stuff you have released in the past?

We simply call it dark metal! It is melodic metal with symphonic elements, dynamic passages, theatrical performances, with intriguing and a bit cynical lyrics.
We believe that as we evolve as humans so does the music we compose.


3.The band has been around since 1996 but has only released 2 full length, a demo and a single and also there has been no new material since 2002, can you tell us a little bit more about it?

Composing music takes time and patience. Changes in lineup, economic and political spectrum as well as personal events directly impact the ability to release new material. Also when you want to do the best you have to find the best to work with so the selection process for the band members is thorough and requires time. It is easy to notice that our sound has evolved since 1999. As the years pass everyone progresses as a human being and that gets directly reflects in our music too.

Even if we didn’t release a new LP for several years we were still active on the metal scene participating in many live shows.


4.What are some of the lyrical topics and subjects the band explores with the music?

The concept is focusing on the drama, life contrasts and inner struggles of the soul, a psychological puzzle "like an Arlechino act".

The lyrics are focused on the three evolutionary phases of the human spirit.
First one exposes the lie, falsehood, hollowness, deceitfulness and strong egos which are causing suffering to others.

The second phase creates an image about the positive part of humanity, the good we are able to exhibit and the inner power of free will.

The third and final phase represents the ether, universal, macro-cosmic stage.
Without limits the human is the Universe ant The Universe is rolling into him.

In fact, the album is a transposition of universal evolution of the human spirit. Each song represents a different face of the human being but in its entire the album is a window to the Awakening of the human consciousness; from selfishness, malice, “humans playing with other souls”, the whole picture turns to the role of the people on this planet, the achievement of the spiritual level.


5.What is the meaning and inspiration behind the name 'Kratos'?

Kratos is a Greek word meaning force, strength or power. We relate the meaning of Kratos with the strength that is in each human being, the strength to build but also to destroy, the mental power to surge above negativity but also the dualism of the human beings, the universal force that keeps us moving on.

Some notable events were the Tiamat opening act in 2005, 2008 Summer Nights Open Air Festival in Austria as well as concerts with Umbra et Imago, Rotting Christ and Suicidal Angels to name a few.
We always bring something new through our live performances so all shows are memorable.


7.Do you have any touring or show plans once the new album is released?

The release show for “Arlechino” is on May 6th in Bucharest Romania. It will be a spectacular event where we will be accompanied by a strings quintet (3 violins, 1 cello, 1 double bass). We are absolutely excited! We dreamt for a while to be able to organize such an event and our dreams came true!

As future plans, we are working on a promotional tour for our new album.


8.On a worldwide level how has the feedback been to your music by fans of gothic and extreme metal?

It’s very nice to see people asking about your new materials or live performances. We have visitors on our official channels from worldwide so I believe this is a good thing.

All is well when the music is created with passion. We are not here to judge or make comments on others but rather to focus on how Kratos can and will bring an improvement to metal.


10.Where do you see the band heading into musically during the future?

It is impossible to predict the future so let’s focus on our immediate goals for this matter. Primarily it is our desire to set a higher standard in metal at national and European level. To achieve higher standards, a lot of work and dedication will have to be invested which of course takes time but that also allows us to evolve and gratify all those who love our music.


11.What are some of the bands or musical styles that have had an influence on your music and also what are you listening to nowadays?

We listen a lot of music of different genres. We haven’t a specific “pattern” and we prefer not to surround ourselves with a particular genre. Our favorite music ranges from epic, movie soundtracks as well as grind, death, black.


12.What are some of your non musical interests?


13.Before we wrap up this interview, do you have any final words or thoughts?

Thank you very much for this interview!
I really hope that our “Arlechino” will conquer the hearts of the listener and the mind by its message. Stay true to yourself and to others!
Posted by OccultBlackMetal at 11:46 AM