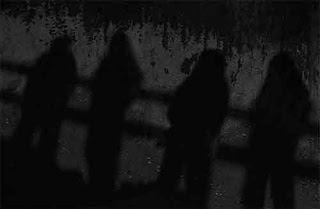 1.For those that have never heard of you before, ca you tell us a little bit about the band?

Somewhere autumn 2013 beyond the reach of my control I experienced loads of trouble sleeping. In stead of wallowing in sadness, sorrow and exhaustion l spent many nights writing music, in the beginning mostly riffs without any idea where it would lead me to, after a few months things started to fall in place and somewhere february 2014 the first Ides songs were composed. Back in that period it was just me, and until we started recording our first promo no others were involved.
At the time of the recording the band consisted of HTP (vocals), TMM (drums), GEP (violin) and me (guitars/synths). As said above, we recorded a one track promo and went on recording our full length immidiately after that. Both recording and mixing took up quite some time, we send out a rough version of the album to a selected set of labels from which we received quite a lot of positive reactions. After rearranging some songs, adding some extra synth and violin parts and getting the songs mastered we found that Vic Records was the best fitting label for us, they really love the old school death metal and doom/death metal that is so dear to our hearts and really understand what we want and stand for and now it is time to see what the rest of the world thinks about our depressive tunes.


2.You have your first album coming out in April, how would you describe the musical sound that is presented on the recording?

From the late eighties/early nineties my main interest concerning music has been doomy death metal, starting with the first Paradise Lost releases and My Dying Bride, discovering Celtic Frost, Candlemass and Trouble, and offcourse being knocked down by Winter. I still remember buying the Into Darkness album and playing it non stop for days and days and days.

During the writing sessions I dazed off into an almost hypnotic state and went back to those days. Where many doom-death bands have clearly a lot of Black Sabbath influences, we are more influenced by the above mentioned early doom-death bands, don't get me wrong, I like Black Sabbath, early Ozzy solo and Dio stuff a lot but I do not think those albums have been of much influence on Ides. If any music prior to the first wave of doom death metal has made a mark on Ides it would be Marc Bolan/T-Rex, Bathory's Hammerheart and Celtic Frost's Into the Pandemonium.
If I was to describe the musical style/sound of Ides/our debut album l guess it would be something like old school depressive down tuned doom death metal with psychadelic soundscapes and synths.

While writing the songs l spent many hours thinking about how l feld back in the days l got infected with the doom-death virus. It was not the most joyful period of my life and most of the lyrics are based on my life and times from those years, offcourse quite metaphorical (l did not really drown -Relief, nor did l survive a nuclear war -children of the revolution).

4.What is the meaning and inspiration behind the name 'Ides'?

It might strike you as pretty far fetched but let me try to explain my thoughts and how l caress this band and its endavours.
Ides was founded in a time when I was living day to day, month to month, closing one period of my life, entering a new one, leaving behind just as much as it has coming, balancing on the edge of hope and despair, a monthly struggle to retain just enough to proceed, the end of the beginning, the beginning of the end. According to the old roman calendar ides is the centre day of each month. Ides is the pivot point, Ides is the centre.

There was and still is no intention of bringing the songs to the stage but we will see what happens, also currently we do not have a drummer and the other members live pretty far apart while all having enormous busy lives which makes rehearsing or even planning rehearsels almost impossible.

7.The new album is coming out on Vic Records, are you happy with the support they have given you so far ?

Vic Records is lead by someone with a lot of similair musical interests, and really understands what we want and seek for concerning the distribution, promotion and the look of the release it self while never interfering with the music/trusting us completely. Everything we asked for was taken care of and on top of that we are featured on a sampler cd that comes with the next issue of SOB magazine and I have seen quite some adverts for magazines with our albums amongst the other new Vic Records releases.
We are proud to be a part if the Vic family and as things look now, we would be happy to stay there for a while.

8.On a worldwide level how has the feedback been to your music by fans of doom and death metal?

Feedback on my music ...
I have been active in several black- and death metal bands (a.o. Empire of the Scourged, Göll, Blunt Knife Idol, Styxian Industries and Temple ov Decibel) the vast majority of the feedback has been very positive for those bands, only Temple ov Decibel has received very mixed and sometimes very bad comments but we expected that and had the best time creating those songs.
Regarding Ides we have to be a bit patient, we did not put much effort in getting reviews/opinions for our promo and most of the reviews for the upcoming release have yet to come, however the people that have heard songs are all very enthousiastic and looking out to get the fysical album in their hands so we are pretty confident and looking forward to the coming reviews!

The music Ides delivers onto the world will always be heavily rooted in the late eighties/early nineties doom death metal. We have written the frameworks for twelve new songs and a few things we can tell is that allthough it will contain mostly utterly slow riffs, doomy rhythms and devouring dramatical melodies we will incorporate some more uptempo riffs into the songs as well, also we will use more different instruments including piano, flute and horns in our compositions.


11.What are some of your non musical interests?
I am trying to divide my time between all sorts of creative activities, for instance besides the diverse musical projects I am involved in l am currently into making buttons for bands, after years if not even owning a single pencil I am drawing more and more, I worry about a lot of things which also takes up quite a portion of my time and l am looking into buying a screen printing unit.

Thank you for taking time to write us a review and give us the opportunity to tell some more about the band. To all readers l want to say: keep an eye out on both Ides as well as Vic Records. Our album 'Sun of the Serpents Tongues' is out now, it is available from both Vic records as well as from us, be prepared to be bored to death and get your copy now!
Posted by OccultBlackMetal at 3:30 PM